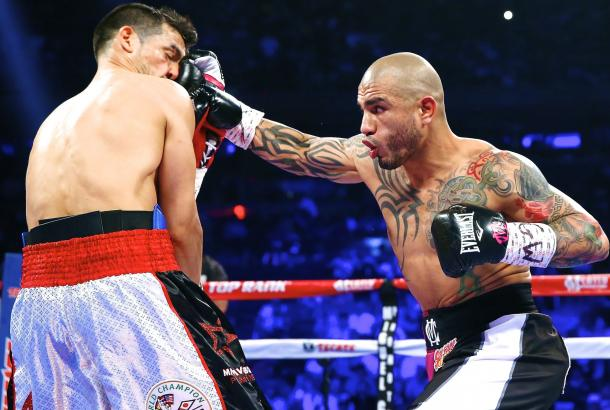 Last Saturday night,  Miguel Cotto made history in becoming the first Puerto Rican 4 weight world champion in a brilliant display against the then WBC middleweight champion Sergio Martinez.
Cotto aged 33 was making his first appearance at middleweight and looked completely comfortable at the weight. His hand-speed advantage over the 39 year old Martinez was obvious and despite being the naturally smaller man he seemed to have the power advantage.
Coming into this historic fight there were many question marks surrounding the condition of Martinez’s surgically repaired knees. Martinez had looked like a fighter on the decline in his fight against Martin Murray over a year ago and he had not fought since.
Martinez had undergone a lengthy rehabilitation process to try and get his knee’s fit to fight but it was obvious pretty much straight away that they weren’t. Martinez lacked his usual movement and elusiveness and looked like a shadow of the boxer he was a couple of years ago.
His legs looked fragile and he just wasn’t able to bring the Sergio Martinez of old back into the ring.
This isn’t to take away from the performance of Miguel Cotto who was absolutely fantastic. He kept up the pressure on his opponent for the whole fight and looked solid and compact.
Cotto didn’t rush in looking to land wild shots but boxed very cleverly and landed big shots when the chances presented themselves.
Such opportunities presented themselves as early as the first round. Cotto floored the champion a stunning three times in the first round alone. Martinez showed the heart of a champion and somehow made it out of the first round.
Martinez slipped to the floor several times in the fight without a punch landing and his knees were just not stable enough for the job. It was sad to see a great fighter who has provided some fantastic entertainment over the years with his athletic movement, reduced to what we saw last night.
Martinez was hit again with a well timed shot in the ninth and the referee believed that his knee had touched the ground when it buckled. It was shown that his knee had not touched the ground but a knock down was given non-the-less. This put Martinez so far behind on the scorecards that a knock-out would be his only chance of victory.
Martinez was struggling badly and his corner had little choice but to call the proceedings to an end following the ninth round. They knew that their man couldn’t do anymore and they did what any good corner should do and saved their man from punishment.
Miguel Cotto was simply outstanding and reaffirmed why he is a future hall of famer. He looked strong, quick, solid, he had everything that he needed. Cotto looked more like the fighter of a few years ago and credit has to go to his relatively new trainer, Freddie Roach.
Roach developed a fantastic game-plan for Cotto to follow and he did so with precise application. It was a beautiful display of boxing skill and a master of the ring at work.
This surely has to be the end of Sergio Martinez in the ring. He has had a fantastic career and can stand tall as having been a good champion over several years.
Considering he didn’t enter a boxing gym until the age of twenty he has been a phenomenal success. He is a very unorthodox fighter who has used his natural athleticism to aid him in the ring but once that began to fade he was always going to struggle to compete at the highest level.
Martinez has been an incredible fighter for his age over the last few years and is a credit to our sport and to his country of Argentina. Hopefully he decides to call time on his boxing career as to continue would be to risk his legacy.
For Cotto there are a vast number of options available. He could remain at middleweight and look to fight someone like Gennady Golovkin. He could move down to light-middleweight which he is more accustomed to and fight Saul Alvarez provided he beats Erislandy Lara, which is no forgone conclusion.
Cotto will get a huge fight again next time out and we really should enjoy him whilst he is still here. He has been a fantastic warrior over the years and has shown once again what a classy boxer he is.
Tweet