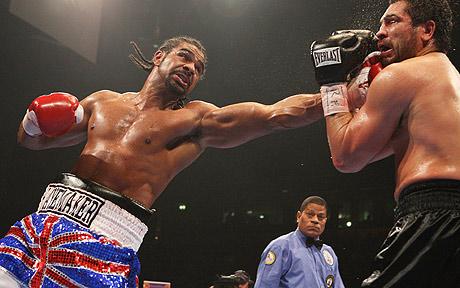 Now that the dust has settled and beef has been resolved, if indeed there really was any, speculation is rife as to what’s next for David “The Hayemaker” Haye [26-2 – 24 KOs] following his emphatic stoppage of a very game Derek Chisora [15-4 – 9 KOs]. With the revival of verbal jousting between the Haye and Klitschko camps in the media, it’s difficult to gauge the probability of Haye meeting Vitali Klitschko [44-2 – 40 KOs], despite the fact it would represent by far the most lucrative fight for both boxers.

With due consideration of Vitali’s political ambitions, it has been suggested that fighting Haye will suddenly be much more likely to happen if Vitali underperforms in election cycle polls later this year. Considering how great an ambassador he has been for the sport, there are few boxing fans who wouldn’t wish Vitali well in his political career.

If a fight with Vitali doesn’t materialize, there is little else that would motivate Haye. A rematch with Wladimir Klitschko [58-3 – 53 KOs] undoubtedly would, but enthusiasm for such a fight would be significantly reduced, while Haye’s chances of victory would be no better than the first time round. On that night, Haye was extremely wary of Wlad’s one-punch KO power, as well as subordinate to a very underrated jab. Neither factor would be negated even if Haye didn’t have a toe complaint. Wladimir was able to cut-off the ring effectively enough to win a comfortable decision and would have no issues doing so again. After all, Haye’s tactics would almost certainly be very similar in a rematch. Of course, Haye would once again make bold claims about how he’d jump on Wlad from the opening bell, even though he didn’t even do that against Audley Harrison!

So what about a hypothetical match between Haye and Vitali? At a glance, the older Klitschko could be a more winnable fight for Haye. In comparison to Wladimir, Vitali has less one-punch KO power, less snap in his jab, inferior lateral movement, and is prone to cuts. Vitali’s exceptional work rate, size and solid power with both hands has made him an insurmountable proposition for contenders and pretenders alike in today’s division, but how would he fare against an elusive opponent who is content to remain on the outside for large periods of a fight? To that, many may be of the view that Vitali’s performance against Chris “Rapid Fire” Byrd over a decade ago is evidence that he would fare well under such circumstances, but Haye is much bigger, hits harder and arguably has a higher work rate than what Byrd ever had. In addition, considering how much Vitali has slowed down at the grand old age of 41, it’s certainly not farfetched to suggest that Haye could outpoint him. For this reason, Haye vs Vitali would be a much more interesting and competitive fight than Have vs Wladimir II.

If Haye wanted a tune-up, he could respond to the challenge of Tyson Fury [19-0 – 14 KOs). Fury is looking for an opponent in November and Fury’s physical dimensions would help Haye prepare for Vitali, but the modest payday may be too discouraging for Haye. It would be a tough fight to sell in terms of PPV due to the fact that Fury is still largely unproven and yet to appeal to a wide audience. Furthermore, if Fury’s recent development is anything to go by, it would certainly not be a fight without its risks.

With talk of Haye going back into retirement if he is unable to fight Vitali, it’s a possibility that we might not even get to see David Haye in action again, despite the fact he’s aged just 31. Haye has always talked of his desire to retire early from the sport whilst his faculties are still intact. If he does bow out, the heavyweight division will certainly be worse off for it. On the financial side of things, Haye has a massive fan base in the U.K. and is a large PPV draw. As for what he brings to the table in terms of ability, Haye is a very good heavyweight in today’s era.

Ever since stepping up a weight class in pursuit of new challenges, Haye has maintained his cruiserweight speed and harnessed genuine heavyweight power. Just ask Mr. Chisora, who was stopped for the first time against Haye inside 5 rounds, yet was able to withstand 12 rounds of punishment against Vitali earlier in the year. Not to say Haye has more power than Vitali, but it’s impressive nonetheless considering Chisora’s excellent durability. It confirms that Haye, despite not being a natural heavyweight, is capable of KOing anyone in the division. Love him or loathe him, Haye is a top #3 heavyweight for as long as he chooses to stick around.