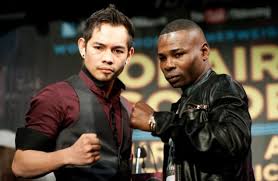 Leading up to the fight Donaire had to take the spotlight and somewhat act out to help sell tickets while Rigondeaux played the role of the businessman. The fight itself took a long time to sell out.

But let’s take a look at the fight. Fans might not have been entertained, but they were unaware of what they were seeing which was a beautiful chess match from the beginning to the end.

In round one both fighters came out very cautious but Rigondeaux asserted himself with a beautiful overhand left that knocked Donaire back. Donaire was by far the busier fighter throwing more punches but Rigondeaux slipped most of the punches and landed the cleaner more effective punches.

The next couple rounds ended up the same way up until round four when Donaire started to lift Rigondeaux up off the ground and came close to tackling him. The near tackle seemed to ignite the two and they started exchanging hard punches with Rigondeaux slipping most of them and landing the more effective punches marking up Donaire’s face.

In round five we saw Rigondeaux even up the score for the near tackle he received in the previous round, when he got Donaire in a headlock and then put on a defensive clinic not allowing Donaire to touch him.

In round six Donaire seemed to try to pick up the pace but Rigondeaux just countered continuously with beautiful shots snapping Donaire’s head back.

The chess match continued for four more rounds. Then in the tenth  Rigondeaux hits the canvas from a slip. He then again hit the canvas, this time from a beautiful left hook which seemed to wake him up a bit. Rigondeaux began to taunt Donaire and swayed the round slightly back in his favour. Once again he began to effectively counter the onrushing Donaire but still lost the round because of the knockdown.

By the eleventh round the crowd had been booing due to the lack of action. Donaire followed the advice from his corner and picked up the pace and landed a nice combination at the beginning of the round. Rigondeaux picked up the pace himself and out landed Donaire with cleaner more effective shots.

The final round started off with a grapple which led to both fighters going down and almost out of the ring. From then on, Guillermo Rigondeaux took charge throwing more punches. He hurt Donaire which had Donaire on his bicycle. Rigondeaux landed a beautiful shot on the right eye of Donaire causing it to swell leaving him unable to see. Donaire immediately protected with his right hand firmly pinned to the side of his face which resulted in Rigondeaux repeatedly teeing off and assuring the victory.

Both fighters showed class after the fight which is always a great thing to see, but only one of the judges’ score cards seemed accurate. Rigondeaux effectively schooled Donaire throughout the whole fight out landing him with cleaner punches.

So what was deemed a dull fight, by those who only crave action, turned out to be a beautiful technical matchup between two great boxers. You truly saw who was more technically skilled and in control of not just the opponent but of himself by showing tremendous discipline.

One fighter remained undefeated and another fighter humbled. The titles became unified and a technical masterpiece is in the books. The only question that remains is where do both men go from here?