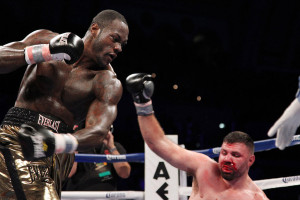 Deontay “Bronze Bomber” Wilder aims to be the first fighter ever to knockout Johann “Reptile” Duhaupas when he squares off with him September 26 at the Legacy Arena in Birmingham AL. in defense of his WBC heavyweight title.

Duhaupas (32-2, 20 KO’s) has twice gone the 12-round championship distance in his career. Both were losses with the most recent being a unanimous decision loss to Erkan Teper this March. Despite the recent setback, the “Reptile” said he plans to make the most of his American debut and bring the heavyweight championship back home to his native France.

“Deontay is a huge competitor,” Duhaupas said in a press conference in late August, “But I’m coming into this fight prepared to make things very difficult for him.”

While the six-foot-five Frenchman boasts a 10-round majority decision victory in his most recent fight in April, he has yet to fight anyone with a destructive record like Wilder, who has stopped out 33 of his 34 opponents. Wilder, a native of Tuscaloosa AL., wants to deliver his second knockout in as many fights in front of a home audience.

“At the last fight, the energy was electrifying there,” Wilder said in the press conference. “It was so loud. People were so hyped, and you could feel the wind from the people’s voices traveling around when they shouted my name.”

Although Wilder, 29, holds one of four major sanctioning body belts in the heavyweight division, the other three, IBF, WBA and WBO, are owned by reigning champion Wladimir Klitschko (64-3, 53 KO’s) of Ukraine. In a recent interview with HoopJab’s Neal Anthony Johnson, Klitschko respectfully sounded off on Wilder’s competition so far as champion. Klitschko said that although Wilder possesses great skill, his opposition is not what fans expect of him.

“Obviously he’s winning and winning in an impressive way,” Klitschko said of Wilder. “But I wish he could have better opponents.”

Klitschko would go on to say that he understands Wilder’s limited control in his opponents, but hopes that Wilder will step up and demand stronger opposition from his management team. As a competing heavyweight Klitschko has the incentive to ridicule Wilder’s matchmaking, however, he is not entirely wrong.

Wilder’s previous opponent, Eric “Drummer Boy” Molina (23-3, 17 KO’s) was ranked ninth by the WBC before their fight in May. Since his ninth-round KO loss to Wilder, in which he cracked and dazed the champion with a left hook in round three, Molina has fallen far down in the WBC rankings to No. 22.

The 34-year-old Duhaupas is not even ranked within the WBC’s current top 10 rankings. Current being a literal term since the WBC runs through top ten fighters seemingly as quickly and unpredictably as an ocean might carry and wash away unsuspecting swimmers.

It is important to remember that Wilder has only had one title defence, Duhaupas being his second, making it too early during his reign as champion to declare him a bomber of strictly bums. He defeated a solid heavy in Bermane Stiverne (24-2-1, 21 KO’s) in January to win the title and earn the right to make his first voluntary defense as a result. The Stiverne fight was Wilder’s first and only fight to go 12 rounds, but he dominated the fight according to the judges who scored it unanimously in his favor.

Now that Wilder is completing his first year as champion, many heavyweights like England’s Anthony Joshua (14-0, 14 KO’s) and Tyson Fury (24-0, 18 KO’s) have declared their interest in fighting him. Even Stiverne has gone on the record asking for a rematch.

“This is a different ballgame when you’re dealing with the heavyweights,” Wilder said. “Everybody’s coming to get what I have. I like it. I love it actually. I like being the world’s most wanted in a positive way.”

While Klitschko may not be alone in wanting to see Wilder face tougher opposition, he like the others will simply have to wait. The six-foot-seven “Bronze Bomber” will first be aiming his 87-inch reach towards Duhaupas as he looks to make a statement on NBC.

“He’s never been knocked out until now,” Wilder said. “That’s always the ultimate goal when I’m in there with my opponents, to take them down. That’s how my name has gotten out there, through knockouts, and I want to keep that legacy going.”