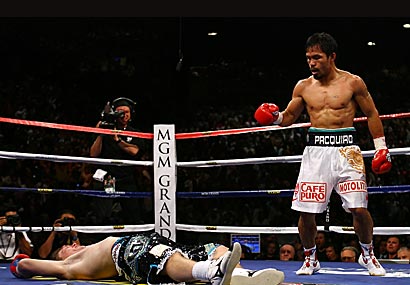 To Filipino boxing fans Manny Pacquiao is a boxing God. To boxing fans around the world Pacquiao is a tremendous and exciting boxer who hardly ever leaves fans disappointed. Many of his greatest victories have been KO’s/TKO’s over tremendous  names in boxing. His most significant victory was over Oscar De La Hoya which boost Pacquiao into superstar status and his greatest knockout victory which came after the De La Hoya fight was a 2nd round KO over Ricky Hatton which assured Pacquiao’s place at the top of many people’s lists.

Those types of victories made Pacquiao a fan favorite fighter who punished opponents and put them to sleep or battered them into submission but those times have changed. Pacquiao used to constantly go for the kill of his opponents but after so many risks and so much damage obtained from going toe to toe Pacquiao has backed off of opponents after his fight with Miguel Cotto (which was his last knockout victory). Since the Cotto fight every fight has gone to the cards except for his last fight with Juan Manuel Marquez.

Pacquiao seemed to have that killer instinct when he fought Marquez and he was going for the kill but the fact that the two fighters knew each other so well, Marquez was able to time and counter Pacquiao (contrary to some belief it was not a lucky punch as there are no lucky punches in boxing) and knock him out.

When Pacquiao steps into the ring with Brandon Rios that instinct may be there. There has been some bad blood between the two camps when Pacquiao fought Antonio Margarito in which Rios was cracking jokes about Pacquiao’s trainer Freddie Roach. Pacquiao will need that killer instinct when he faces Rios who is a heavy puncher and is relentless in his attack. If Pacquiao pulls his foot off the gas he could be in for a long night but if that itch to hurt and finish an opponent is still there then the fans will be in for one hell of a fight.