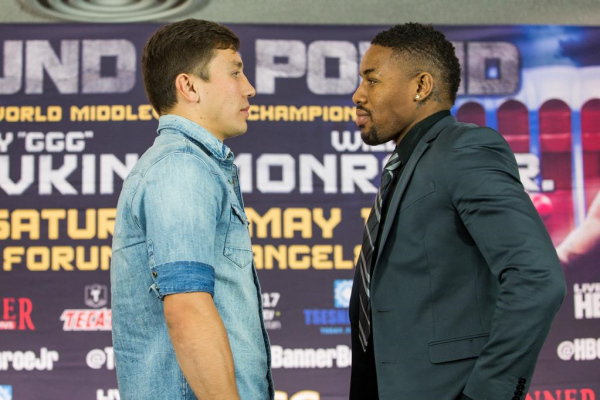 Saturday May 16th Gennady Golovkin (32-0-29 KOs) will continue with what has been a blazing pace of fights, as the Kazakh Warrior is already taking his second fight this year and it’ll only be May when he does it. He continues the strenuous schedule that has been set, but he has done it with relative ease, fighting three times in 2014, four times in 2013. A lot has been said about his competition but its hard when top name fighters are finding every reason not to fight you.

So in steps relatively unknown Willie Monroe Jr. (19-1-6 KOs) who has been announced the opponent for Golovkin on May 16th. Fresh off winning the “Espn Boxcino” tournament and a thorough beating of brawler Bryan Vera, Monroe Jr has answered the call to fight the alluded KO artist. Willie caught up with Thaboxingvoice speaking with our reporter Fernando Pimentel at the press conference for the fight.

Our first question for Monroe was, Why Golovkin? “It’s a fight I’ve been asking for since Boxcino, they said out of all the middleweights who do u want to fight, and I said GGG,” says Monroe Jr. “If you’re the biggest and the baddest I gotta go see how big and bad you are, a lot of the other middleweights won’t fight him now he has one who will.”

Casual fans may not be acquainted with Willie Monroe Jr. but hardcore who have watched the Boxcino Tournament know of his slick southpaw style. Some would say it could give GGG some problems while not going as far as giving the fight to Monroe. He spoke on that saying “I’m just going to use my ring IQ, I won’t give my game plan out but my intelligence. I always say you can overpower guys, but there are going to be guys more powerful you can out speed guys but there are going to be guys faster than you, but you can outthink anybody it’s a physical chess match.”

Willie Monroe definitely has a tough feat against him for this Golovkin fight. Golovkin has been destroying opponents regardless of style matchup it seems like if you don’t have power to back GGG up in the ring you just won’t last too long. It has yet to be seen if Willie Monroe Jr. will have what it takes to defeat GGG, and the odds are not in his favor lets see how the chips fall on May 16th.