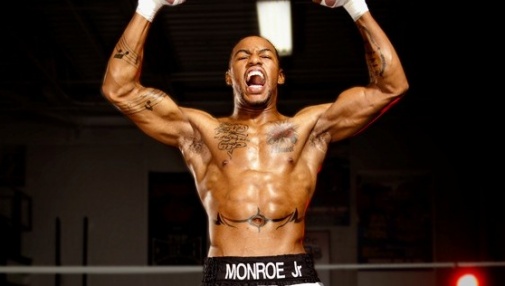 Middleweight titleholder Gennady ‘GGG’ Golovkin(32-0, 29KO’s) has developed a fearsome aura as a result of the punching power he exhibits in the ring. So much, so that when he makes his entrance into a fight some WWE Undertaker-type funeral music would fit the occasion perfectly. A compilation of his knockouts -which he has scored in his last nineteen fights consecutively- would be enough to chase any sane man into the hills.

Apparently this is not the case as far as his next opponent is concerned. Willie Monroe Jr(19-1, 6KO’s) looked thoroughly at ease when speaking to Ellie Seckbach from Esnewsreporting.com at the press conference to formally announce his date with doom. After receiving some congratulations for even taking the fight, he made his position clear.

“I’m not here to cry and whine about who’s in the ring; I’m here to kick butt.”

“Obviously his power would concern anybody. He has knockout power in both hands, but there are ways around everything. You can outthink anybody, you can outmaneuver anybody, you know, so it’s gonna be a chess match that night.”

This chimes well with something Chris Eubank said when reflecting on his first epic battle with nemesis Nigel Benn in the early 90’s. He spoke about remaining objective, even when facing the venomous hatred Benn seems to hold for him. There was a heated build up and a terrible war when they met and wouldn’t you know it, Eubank emerged the victor, crediting his ability to remove his feelings from the equation as the key.

Obviously this was not the only reason for Eubank’s success; his cast-iron jaw didn’t hurt either. But the point he was making was he was able to focus on exactly what he needed to do when faced with a dangerous opponent because he refused to allow emotion to cloud his mind. He kept Hatred at bay. Monroe must do the same with Fear.

He appears determined to accomplish just that, refusing to pay much attention to the impressive form of the champion.

“I really don’t focus on physical attributes. I know I’m a tremendous athlete. I work extremely hard, so that’s not something I even think about. It’s up here[ tapping his temple with his forefinger].”

Accentuate the positives eliminate the negatives; I wouldn’t buy it if he didn’t look so relaxed as the words left him. We shall see just how committed he is to his philosophy when he meets Golovkin on May 16th in Inglewood, California, but a peculiar notion keeps creeping into my head whenever I think about this fight.

I think about Frankie Randall and Junior Jones. Two slick and athletic boxers from the lower weight classes which ended the undefeated streaks of Julio Cesar Chavez and Marco Antonio Barrera respectively; two murderous punchers. The antidote to a hurtful puncher seems to be -at least by these two examples- someone who is quick of hand and foot, accurate and who can keep moving.

Monroe has less experience and less power than his Kazakh counterpart, but could his other abilities be arranged in such an order as to upset the applecart here? If he can stick, stick and move for twelve rounds, he could be in with a chance. In all likelihood, we will see the same undeterrable forward march from Golovkin on the night before he starts throwing his bricks.