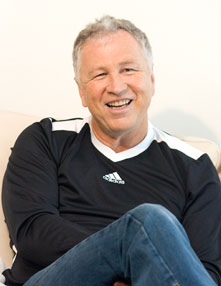 Boxing is booming and resurging in the country of Canada and in particular the province of Quebec. A main reason for this boom is the President of GYM, Yvon Michel.  Long a staple of the Canadian boxing scene as the head coach of the Olympic Jr. to being the National team head coach to being the general manager of Interbox Promotions, Michel branched off and started his own brand in GYM. Michel states, “It’s hard work. You can work from early in the morning to late at nights. Negotiations arise at any given point of the day so at times; this can be a 24 hour a day job.”

It’s a great time to be a boxing promoter in Canada and Michel is a reason behind the success of the sport in Canada. “Obviously, hockey is a religion here, but Canadian people love champions and when you have champions, you can sell that to the people here.” When he says here, he means the Province of Quebec.  “Everything’s here for the fighters, an excellent fan base, skilled trainers, and excellent promoters.”

While he’s based in Quebec, his talent isn’t only based in the country of Canada. Yvon has fighters from all over the world, but has one stipulation for his fighters in order to build his brand. “They have to move and live here.  I need to build you up to build you as an attraction here. That’s the only way you can interact with the fans and have them follow you. If you take a look at a fight we had here between Timothy Bradley and Kendall Holt, it did horribly financially because these guys had no following here. I have about 8 fighters under contract and at one point I had 20. Ideally I’d like to have 10 and build them here to be successful attractions”, Michel said.

He has built many attractions, one being former light heavyweight champion of the world Jean Pascal. Pascal is coming off a loss to Bernard Hopkins and is now set to meet IBF Champion Tavoris Cloud on Showtime in August. Should Pascal win as Michel expects, there is a major showdown Michel wants to accomplish. Michel said, “Should Pascal win as I think he will because he is a special talent and with the way the boxing schedule goes, I’d like to make an all Canadian showdown between Pascal and IBF Super Middleweight Champion Lucian Bute. Dawson and Ward will probably fight, so that takes away Dawson from being an opponent for Pascal, and Ward takes away from being a Bute opponent. So it makes sense and it will be the biggest fight in Canadian history and an easy one to make with InterBox who represents Bute.”

Bute is a possible opponent not just for Pascal, but for another of Michel’s fighters who is steadily making a name for himself one KO at a time in Adonis “Superman” Stevenson. Stevenson is the WBC Silver title, so it would be thought that Stevenson would be in line for a shot at the WBC Super Middleweight title that was just stripped from Andre Ward for whatever the reason. Just as unexplainable that action was, the fact that Stevenson isn’t in line to fight for the title is ever more worrisome. “There were talks that Gonzalez (Stevenson’s last opponent) was going to pull out of that fight just to get a shot at the title. Thankfully he didn’t and we won. But from what I was told there was pressure from Dirrell’s promoter to make the fight with the other fighter before mine. So whatever the case was, that fight with Dirrell is still not signed yet and I understand they may not want to face a big puncher like my fighter Stevenson. So what we’ll look to do is fight an IBF eliminator in August so we can become the mandatory for the winner of Froch-Bute.”

Stars are made in and out the ring. While Michel has some established fighters, the one fighter he cannot stop raving about is his light heavyweight prospect Elieder Alvarez (8-0 5 KOs). “When I tell you this guy is going to be something special, I mean it. He was the best amateur prospect in Colombia. He has everything; speed, skill and power and he is a mature 28 years old”, says Michel. Along with Alvarez, Michel also has heavyweight prospect Oscar Rivas (10-0 6 Kos). Both boxers who were originally born in Colombia but made the transition to the hotbed of boxing that is Quebec and signed with Michel.

Probably the toughest aspect of a promoter’s job aside from building a star is picking up the pieces of a potential one who is coming off a bad loss. Michel has such a case with his rising prospect and future star David Lemieux. The Middleweight was on a strong run before being knocked out by Marco Antonio Rubio. After that setback, he suffered another loss against Joachim Acline by split decision. Now the task for Michel is to build up his former blue chip prospect and its one Michel doesn’t mind tackling because he still believes in David. “The flaw in David was his preparation. I wish he would have turned pro later than the age of 18, so he could learn more things in the amateurs. Now I feel that he’s got the right team and he trains with all my guys and spars with them and that includes Pascal. It’s like a University where all my fighters train and learn from each other. He’s coming back in June on an Alvarez card as the co-main event and then we’re confident he will bounce back strong and get a rematch with Rubio then move on to bigger and better things because there is just too much talent there not to,” said Michel of his middleweight boxer.

Michel is a promoter who likes to keep his fighters active and doesn’t necessarily depend on the big networks to make his business run. In fact, he uses all of his resources to run his business. “I try to do 10 local shows a year and we always do well at the gate. That part of the business pays for the overhead and pays for the fighters so they can actually have a profession. But the key is having a world champion. Then you can use the network money to make a profit and keep building you brand. The fee I get from the network is good but because of a high profile fight, I make twice as much as the fee at the gate where I can pack an arena with 16,000-17000 fans and that right there is building your brand”, says Michel. With his current roster that includes Jean Pascal, Adonis Stevenson, David Lemieux, Elieder Alvarez, and others, he should have world champions that will keep him at the top of the Canadian Boxing hierarchy thus thriving the sport of boxing in Canada.

Questions of comments for me, reach out to me on twitter @BoxingVoice_Vic  or email us at TheBoxingVoice.com.