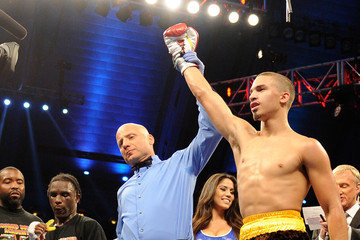 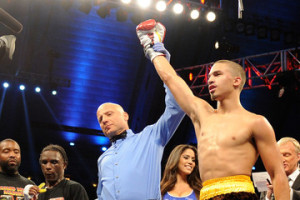 Saturday night at the Barclays Center, David Lemieux and Gabriel Rosado squared off in a exciting middleweight bout. The undercard of the event also produced a great amount of action with quality fights. Among those, was Brooklyn’s own, Zachary Ochoa who faced Jose Miguel Castro. This would mark Ochoa’s 9th professional fight, 6 of them being in his backyard of Brooklyn where he has become a well known star. “It’s a blessing, from a kid who used to fight at 13 in the parks, the alleys, the backyards and stuff like that, and to be fighting at the Barclays Center, its an amazing feeling.”

We asked if he had seen tape on his opponent that prompted them to look for the right hand or if he simply saw an opening. “I saw the opening, my trainer said if you see it you’re going go get it.”

With young, hungry and talented guys like Zachary on the rise. Promoters tend to try and rush them into big fights early. Zachary’s team and himself feel that he is still very young, with 9 fights under his belt he does not feel he needs to be rushed in his career. “Me and my trainer have the same thinking path when it comes to my career. That’s why we are so good together, we have great chemistry and I don’t need to be rushed. I feel great, I’m 22 years old, I’m learning each and every fight. I’m getting better every fight and I love it. I love getting into the gym, learning new things and displaying them in the ring.”

We asked Zachary if he felt 140 lbs was his weight class, or if he felt he could possibly make 135 lbs. “I’m a solid 140, a lot of these guys want to fight at 138, 144, not me. I fight at 140, I train to stay in shape. A lot of guys want to take breaks and be lazy. They end up fighting at catch weights. I want to keep my self discipline so when I’m fighting at that world championship level its nothing new to me.”