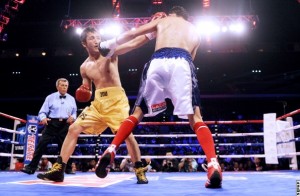 Punxsutawney Phil — the Seer of Seers, Prognosticator of Prognosticators — emerged from his burrow at Gobbler’s Knob in Punxsutawney, PA, and proclaimed, in his native Groundhogese, that two-time Chinese Olympic gold medalist and three-time World Amateur Champion ZOU SHIMING (6-0, 1 KO), from Guizhou, China, would become China’s first Olympic champion to win a world title in the professional ranks.

Singing his version of Duke Ellington’s, “It Don’t Mean a Thing (If It Ain’t Got That Shiming), Punxsutawney Phil strolled up to the microphone for his annual press conference. Wearing a Wild Card Boxing Club t-shirt, personally signed by Zou’s Hall of Fame trainer World-Famous Freddie Roach, the world’s No. 1 pound for pound quadruped had this to say:

“Without a shadow of a doubt, Boxing will begin its Shiming Dynasty on March 7 at The Venetian Macao. How appropriate that the Chinese New Year — The Year of the Sheep — begins in a few weeks. Because it would be shear madness to think, anyone can stop Zou Shiming from becoming the new IBF flyweight world champion. We may be facing six more weeks of winter, but Shimingtime is right around the corner. Can Amnat Ruenroeng successfully defend his title against Zou Shiming? Russell Wilson had a better shot of completing his last pass to Ricardo Lockette.”

“You can’t pull the wool over Punxsutawney Phil’s eyes,” said Roach, when reached for a comment at Zou’s Hollywood-based training camp at Wild Card.

When pressed for a definitive answer on whether Ruenroeng had a chance to defeat Zou, Phil astounded the media by answering in Mandarin and in English.

Making the fight even more intriguing is the history these two warriors already have with each other. Their amateur trilogy began with Ruenroeng winning their first battle — as a late substitute called up by the Thailand amateur team — at the 2007 King’s Cup, which was also Ruenroeng’s first international competition.

Zou won the next two times they fought, including a reverse in their semi-final of the 2010 Asian Games that could have gone either way — and did. Now that they are professionals, the stakes are much higher, and their simmering rivalry is set to become a roiling boil.