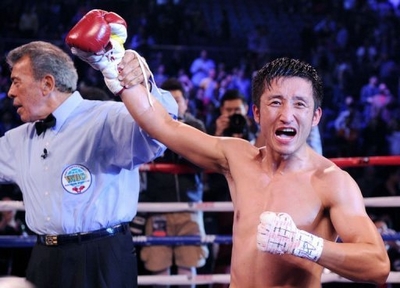 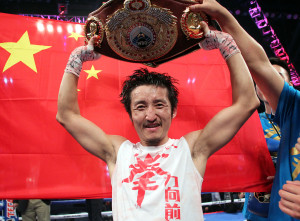 Despite having only six professional fights under his belt, ZOU SHIMIING, the two-time Chinese Olympic gold medalist and three-time world amateur champion is ready for his close-up. Just 23 months removed from his professional debut, Zou (6-0, 1 KO), of Guizhou, China, the No. 1 world-rated contender and an icon in the People’s Republic of China, will challenge amateur rival and defending International Boxing Federation (IBF) flyweight world champion AMNAT RUENROENG (14-0, 5 KOs), of Si Racha, Thailand, in the main event of The Showdown at Sands: Zou Shiming vs. Amnat Ruenroeng, Saturday, March 7, at The Venetian® Macao’s Cotai Arena.

“Expect me to be champion.

“This will be the biggest test for me.

“I am very calm, not nervous. I have been prepared for this moment for a long time. I am focused on myself — on executing Freddie’s gameplan. I felt a lot more pressure when I was in the Olympics. This time the pressure is on Ruenroeng.

“I feel very confident with the professional fighting style now. In my last fight, which went 12 rounds [12-round unanimous decision victory over Kwanpichit Onesongchaigym], I really felt like a professional fighter. That was a turning point for me — a landmark fight.

“The three Olympics, the World Amateur Championships and the past two years as a professional have prepared me for March 7. I don’t need any more fights to prepare me for challenging for a world title.

“Ruenroeng and I fought each other three times as amateurs. What I remember most is that he is good at gauging the distance between us to land his punches. He’s very lengthy with his reach. He was also very good at timing his punches.

“I am asked a lot which means more, winning Olympic gold or a world title. They are equally important to me. The March 7 fight is the next step for me. It is the biggest thing for me right now, but for me personally, not bigger than winning the gold medals.

“I really want to win the world title and bring it back to China. It would be the first time a Chinese fighter won Olympic gold and a world championship belt as a professional. No one has ever done that. I want to make my country proud and advance the sport of boxing throughout China. I am ready for my date with destiny.”
The undercard will feature JOSE FELIX, Jr. (28-1-1, 23 KOs), from Los Mochis, Mexico, battling RAYMOND SERMONA, (17-4-5, 8 KOs), of Manila, in an eight-round lightweight bout which will be televised via same-day delay on UniMás, and Top-10 contenders IK YANG (17-0, 12 KOs), of Dalian, China and PATOMSUK PATHOMPOTHONG (30-2-1, 18 KOs), of Kalasin, Thailand, squaring off in a 12-round IBF junior welterweight title elimination bout.Zou