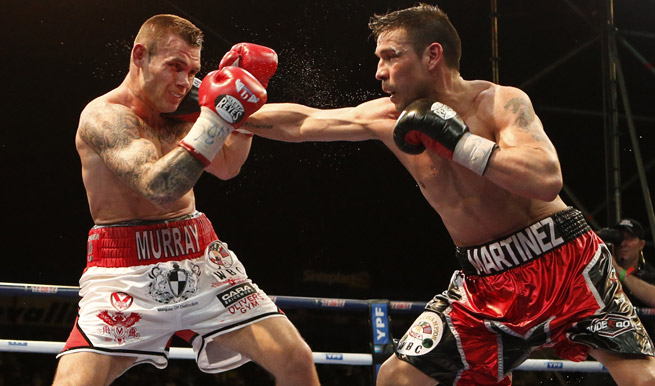 In the theoretical main event of Saturday’s HBO World Championship Boxing, Sergio Martinez successfully defended his lineal middleweight crown against the UK’s Martin Murray. The outcome wasn’t without some controversy and depending on whom you ask, Martinez was lucky to walk away with the “W.”

Martinez started the fight off with his hands below his waist, something he usually doesn’t attempt until later in a fight, which coincides with his comfort level in the match as well as his understanding of the threat level his opponent presents. However, he went in looking to put on a show in front of his countrymen in Argentina. He got off to an early lead, displaying a particular dominance over Murray by utilizing his natural abilities in the ring.

Although Murray was falling behind, you could see that Martinez wasn’t performing up to the level we’ve come accustomed to seeing and Murray was finding spots. After about 4-5 rounds the dynamics of the fight began to change and Murray started landing well executed combinations, specifically hard, flustering right hands behind no nonsense set up shots.

Murray was in complete control at the midway part of the fight and his accuracy began to enhance as Martinez’s declined. The right hand of Murray was landing decisively and Martinez appeared to be without an answer, never settling into his grove. In the 8th, Murray floored Martinez with a right hand, the knockdown hurt Martinez but to his credit he got up and withstood the onslaught.

Later in the fight, Martinez was sent to the canvas on another Murray right, but this one was ruled a slip. After further review it appeared as though it was a blown call, but it wasn’t definitive from the camera angles being showed. The Martinez-Murray bout had made headlines in the weeks leading up to the fight because it was going to use instant replay to make sure missed calls were set straight. It obviously didn’t do its job and as the scorecards would later reflect, the possible point for Murray would’ve proved valuable.

As the fight entered the championship rounds, Martinez stepped on the gas and dug deep as elite fighters are capable of doing. Some argue that Murray slowed down and allowed Martinez to finish strong, I don’t think that was the case and I honestly feel as though Martinez was calculating his stance the round before, evident by his approach in the 10th.

The judges turned in the scores of 115-112, all for Martinez. You have to assume a 115-112 in Argentina could be considered a moral victory for Murray, although I’m sure he wasn’t content with that rationality.

The decision was close, but it wasn’t a robbery. Still, Martinez showed signs of declining and at his age you have to wonder if it was more than an off night. The only clear fact is Martinez didn’t perform up the standards that earned him a spot in the top 5 “Pound for Pound” rankings. Canelo and Chavez Jr. should be licking their chops.

Cristobal Arreola finally stepped into the ring with Bermane Stiverne in a matchup of the WBC’s number 1 and 2 ranked fighters. The bout was the acting main event on the televised portion of HBO’s broadcast due to the unexpected weather conditions surrounding Martinez-Murray in Argentina.

Arreola came out aggressive and found success backing Stiverne into vulnerable situations. However, Stiverne utilized his jab well enough to stage off dangerous exchanges and in the 3rd round he transformed himself from the boxer to the puncher, landing a massive overhand right that sent Arreola to the canvas. The shot landed at the exact moment the bell sounded to end the round, it was so precise that Stiverne’s corner prematurely entered the ring, which could’ve cost him the DQ loss.

Arreola made it to his feet and then to his corner, but he was clearly hurt and showed signs of weakness well into the 4th. Stiverne controlled the fight from that point on with his jab and body attack. Arreola continued to fight on, displaying tremendous heart.

In the championship rounds, Arreola came on strong mostly due to his corner, Henry Ramirez, telling him he needed the stoppage. It wasn’t enough however, and Stiverne won a unanimous decision by the scores of 117-110 twice and 118-109. He is now the number 1 contender for Vitali Klitschko’s WBC heavyweight title.