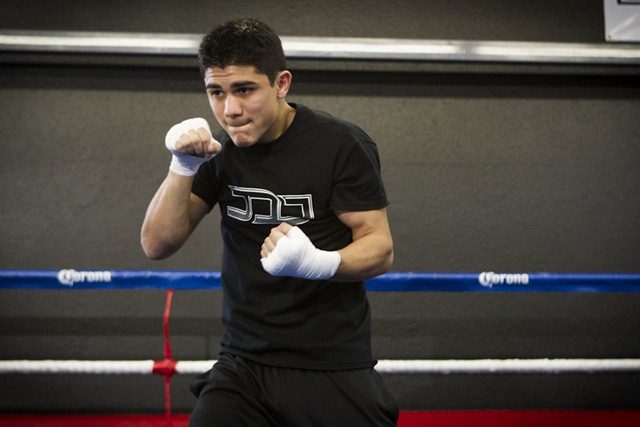 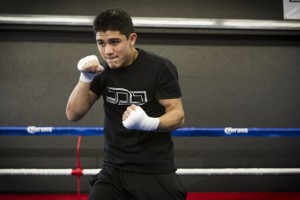 A member of the 2012 United States Olympic team and current NABF Featherweight Champion, Joseph “Jojo” Diaz Jr. (19-0, 11 KOs) has taken on anyone who has stepped up to the plate and on Saturday, March 26, he will make his HBO World Championship Boxing® debut when he faces rising Puerto Rican contender Jayson “La Maravilla” Velez (23-1-1, 16 KOs) at Oracle Arena in Oakland, California.

The 10-round featherweight fight will open the HBO telecast, which is headlined by Two-Time World Champion and top-rated pound-for-pound fighter Andre Ward (28-0, 15 KOs) taking on number one rated IBF light heavyweight contender Sullivan Barrera (17-0, 12 KOs) in a 12-round light heavyweight clash. The event will be televised live on HBO World Championship Boxing beginning at 9:45 p.m. ET/PT

“I am excited and very grateful about making my debut on HBO,” said Joseph Diaz Jr. “HBO is known for putting on the best fights, and I feel honored to defend my title for the fight time on the network. Every fighter dreams to fight on a big stage like HBO and I am grateful to my team, Golden Boy Promotions, my manager Ralph Heredia and my father and trainer for helping me get to this point in my career. I know Jayson Velez is a very tough contender, but I promise not to let my team and my fans down.”

“I am ready and focused for this fight,” said Jayson Velez. “After my loss against Ronny Rios, I had to change a lot of things in my training including my corner. I understood that I had to work harder to prove that I still have what it takes to be on the top of the featherweight division. I am very excited to have that opportunity on HBO and against a fighter like Joseph Diaz Jr. I want to challenge myself and fight the best. I know that defeating Diaz Jr. will prove that I am back.”

“These are two exciting, up-and-coming fighters, with the winner likely soon looking at a world championship battle,” said Oscar De La Hoya, Chairman and CEO of Golden Boy Promotions. “With so much at stake, fans can bank on an action-packed fight with both guys going all out for the knockout.”

“Jayson has great power and experience and has been under those lights before,” said Hector Soto, Vice President of Miguel Cotto Promotions. “This is a great fight for Jayson to be back on HBO and it will be a tough test for Diaz Jr.”

Ward vs. Barrera, a 12-round fight which is presented by Roc Nation Sports in association with Main Events, takes place Saturday, March 26, 2016, at Oracle Arena in Oakland, California and will be televised live on HBO World Championship Boxing beginning at 9:45 p.m. ET/PT. Opening the HBO telecast will be Joseph Diaz Jr. vs. Jayson Velez in a 10-round fight for the NABF Featherweight title presented by Golden Boy Promotions in association with Miguel Cotto Promotions. Follow the conversation using #WardBarrera.

A 23-year-old southpaw, Joseph “Jojo” Diaz Jr. has followed up his stellar amateur career with an equally impressive professional run thus far, with several notable wins showing him to be capable of doing it all in the ring. In 2015, Diaz had his biggest year yet, winning five bouts, including victories over former WBC Silver Featherweight Champion Rene “Gemelo” Alvarado, Ruben “Canelito” Tamayo and Giovanni “Lloviznas” Delgado. In his most recent bout, the South El Monte native stopped Hugo “Olimpico” Partida in two rounds on December 18, 2015, winning the NABF featherweight title. Now he’s ready to kick off the biggest year of his career against Jayson “La Maravilla” Velez.

Hailing from Juncos, Puerto Rico, 27-year-old Jayson “La Maravilla” Velez has been a fine representative of the Caribbean’s fighting capital since turning professional in 2007, winning all but two of his 25 pro bouts. Owner of the WBC Interim Silver, WBC FECARBOX and USNBC titles over the years, Velez has made his mark with victories over the likes of Salvador “Sal II” Sanchez, Dat “Dat Be Dat” Nguyen and Daniel “Huracan” Ramirez, as well as a draw in an IBF title bout against Evgeny “El Russo Mexicano” Gradovich. On Nov. 21, 2015, Velez opened up the pay-per-view telecast of Miguel Cotto vs. Canelo Alvarez against Ronny Rios and suffered his first professional defeat via decision. A victory over Joseph “Jojo” Diaz Jr. will get Velez back into the world title race.