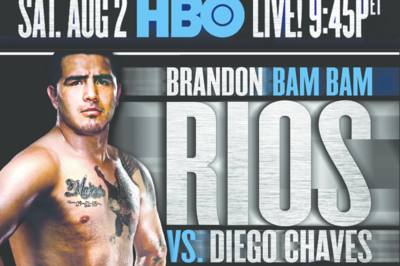 There may not be any super fights but there is still plenty of great action ahead for the month of August.  Steve Waters takes a look at what’s happening in the boxing world over the next month.

August 2
TV – HBO
Venue – Cosmopolitan of Las Vegas, Las Vagas, Nevada
Brandon Rios vs Diego Chaves
Thankfully this fight is still going ahead on Saturday night because until only a couple of days ago it was looking like Jose Zepeda (who fights on the under-card) was going to have to step in and replace the Argentinian Diego Chaves (23-1, 19 KOs), who was having some much publicized visa issues.
After losing his last two fights by clear unanimous decisions against Mike Alvarado and Manny Pacquiao, this is a must win fight for Brandon Rios (31-2-1, 23 KOs) ,the former Light Welterweight champion hasn’t won since October 2012. Expect a war, with the hard hitting Argentinian putting “Bam Bams” granite chin to the test.
Pick – This one is a toss up but I’m picking Rios to get the job done.
August 2
TV – HBO
Venue – Revel Resort, Atlantic City, New Jersey
Sergio Kovalev vs Blake Capello
Also in action on Saturday night is WBO Light-Heavyweight champ Sergey Kovalev (24-0-1, 22 KOs) who goes up against another undefeated fighter, Australian Southpaw Blake Caparello (19-0-1, 6 KOs) this is a serious step up in class for Caparello, do not expect this bout to go the distance.
Pick – Kovalev by KO
August 9
TV – Showtime
Venue – Barclays Center, New York
Danny Garcia vs Rod Salka
Despite the fact that none of us are pleased with his choice of opponent, we will no doubt all tune in to watch Danny Garcia (28-0, 16 KOs) face little known Rod Salka (19-3, 3 Kos).  Anything other than an early knock-out victory for Garcia will be unacceptable.  The Co-Feature for this sees Lamont Peterson (35-2-1, 16 KOs) in a similarly easy mismatch against Edgar Santana (29-4, 20 KOs).  Why it couldn’t of just been Garcia vs Peterson instead is beyond me.
Pick – Garcia by devastating early Knockout
Aug 16
TV – Showtime
Venue – StubHub Center, Carson, California
Kell Brook vs Shawn Porter
Somebodies 0 has to go in what has to be the most anticipated bout of the month as British Welterweight Kell Brook (32-0, 22 KOs) finally gets his chance to fight for a World title against Shawn Porter (24-0-1, 15 KOs) . This fight is full of questions for Kell Brook such as, how will he travel and will he still deliver after stepping up serious levels? After all the best opponent on his record is Vyacheslav Senchenko. If the famous saying “you’re only as good as your last fight” is true then American Shawn Porter is incredible.
Pick – As a Brit my heart says Kell Brook will win but after seeing Porters destruction of Paulie Malignaggi my head disagrees. Porter to win via late stoppage
(Friday) Aug 22
TV – ESPN
Venue Pechanga Resort in California
Austin Trout vs Daniel Dawson
What a difference a year (and a half) makes for Austin Trout (26-2, 14 KOs). Since defeating Miguel Cotto on points in December 2012 he has been on a 2 fight losing streak but despite those losses being against big name fighters, (Canelo Alvarez & Erislandy Lara) poor Trout finds himself on ESPN, fighting on a Friday night, against a former Kickboxer Daniel Dawson (43-3, 26 KOs).
Pick – Trout via unanimous points decision
Do you agree? Share your thoughts and picks in the comments sections below
Tweet