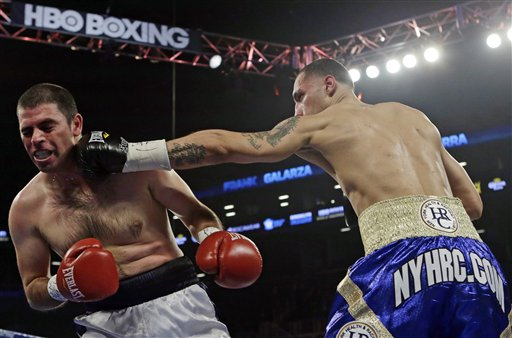 On Saturday September 20th, Brooklyn’s own Frank Galarza will return to headline a card at the Resorts World Casino in Queens.  Before that, Galarza (14-0-2, 9 KO) shared his thoughts with ThaBoxingVoice.com on his future in the sport, what it means to represent the borough of Brooklyn and who he may be aiming for in his step-up fight next year.
2014 has been a banner year for the 28 year-old light middleweight, as Galarza has won all three of his fights, two by knockout and one by unanimous decision and gained exposure by being showcased on Showtime’s popular Showbox series.  Galarza notably handed John Thompson (14-1, 5 KO) then Sebastien Bouchard (8-1, 2 KO) the first, and only defeats of their careers.  This September will mark Galarza’s sixth appearance at Resorts World Casino and he’s looking to make a big impression in front of the hometown fans.  When asked if he feels pressure to perform well in New York (considering how the likes of fellow New Yorkers Luis Collazo, Eddie Gomez and Paulie Malignaggi have all lost their most recent bouts) Galarza says “It’s a great feeling.  Every fight I’m in you will see a show win, lose or draw,[…] I want to show the greatness of Brooklyn […] we’re tough, we’re built different, I want to win and put on a show.”
An orthodox fighter, Galarza describes himself as a “boxer-puncher” and he believes he is just three to four fights away from a significant step-up in the level of competition.  “My promoters and management [have me on a role], I’m not in a rush but we don’t have time to waste.”  The key to success has been activity, Galarza fought five times in 2012, four in 2013 and will fight at least four, possibly five times in 2014.  “I’m always training, always in the gym and always ready”.  Galarza didn’t have an extensive amatuer career and believes he’s still learning and growing at the gym and on the job.  “I’m going to constantly prove myself […] I’m looking be a regular on television.”
Boxing has always been in Frank’s blood.  His father was a pugilist and Frank, “fell in love the first time he stepped in the ring.”  He believes his talent and story can help inspire the community around him.  “I want to be a beacon of hope to people out there […] you can do whatever you want regardless of your surrounds or how you’re raised […] whatever your talent may be, go all the way with it, don’t hold back.”
The light middleweight division is one of the deepest and best in boxing and there are plenty of targets for a young, hungry fighter like Galarza to aim at.  One of the possibilities is Texan brawler James Kirkland or the Charlo Brothers.  “I’m down for whoever.  I don’t mind going in the ring with any of these guys, I’ve got a lot to prove.”  The fight in September is one of the last steps before a make-or-break 2015 year where Galarza will have his chance to shine and prove himself as a force in the division.
Tweet