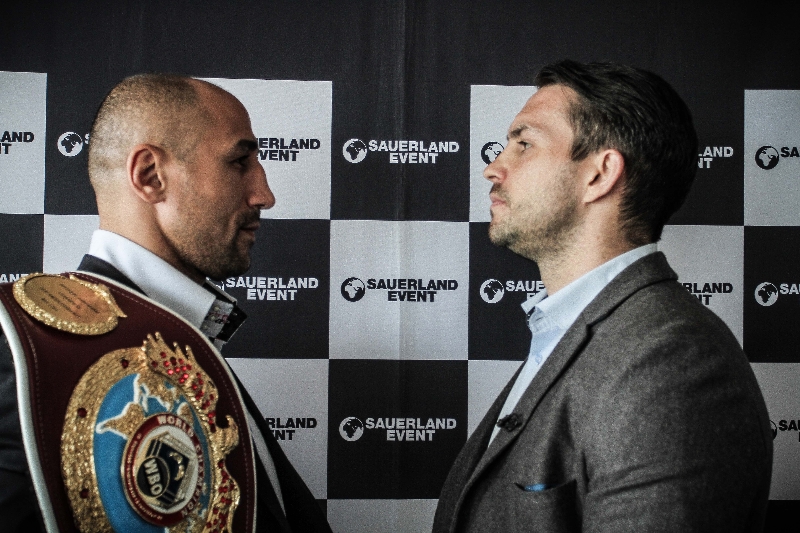 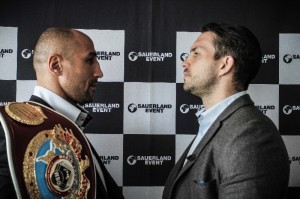 On September 27 in Kiel, Germany, Arthur Abraham (40-4, 28 KOs) puts his WBO World Super Middleweight title on the line against Paul Smith (35-3, 20 KOs). The champion and challenger came face-to-face for the first time at today’s kick-off press conference at the Sparkassen-Arena.

The champion, ‘’King Arthur’’, is anticipating a British invasion on September 27, with Smith having reportedly already sold 2,000 tickets to his travelling fans. ‘’It’s great that Smith is bringing so many fans to Kiel,’’ said the hard-hitting 34 year-old. ‘’English fans always create a good atmosphere – even when they know their fighter will lose. This will be my fourth fight in Kiel and my fourth victory. Anybody who wants to celebrate with me on September 27 should get their tickets now before they sell out.’’

‘’It’s a dream come true to finally get my chance to fight for a world title,’’ said former British Champion, Smith. ‘’I would like to thank Team Sauerland and my promoter Eddie Hearn for making this happen. I have a lot of fans travelling over to watch me become world champion and they won’t be disappointed.’’

Promoter Kalle Sauerland is expecting an exciting fight when the pair meet at the Sparkassen-Arena. ‘’British boxers always have a great fighting spirit.’’ said Sauerland. ‘’Smith will try to get at Arthur from the opening bell and put him under pressure. Arthur will be aware of this and will be ready for whatever Smith has to offer. I think we could be in for a spectacular finish and another successful defence for King Arthur.’’

Smith’s promoter Eddie Hearn is also looking forward to an exciting fight and the opportunity to revive his friendly rivalry with Sauerland. ‘’I have worked with Kalle on two big fights recently,’’ said Hearn. ‘’On both occasions my fighters have come out on top. It will be no different on September 27.’’

Tickets for the WBO World Super Middleweight showdown between Arthur Abraham and Paul Smith are available via eventim.de.