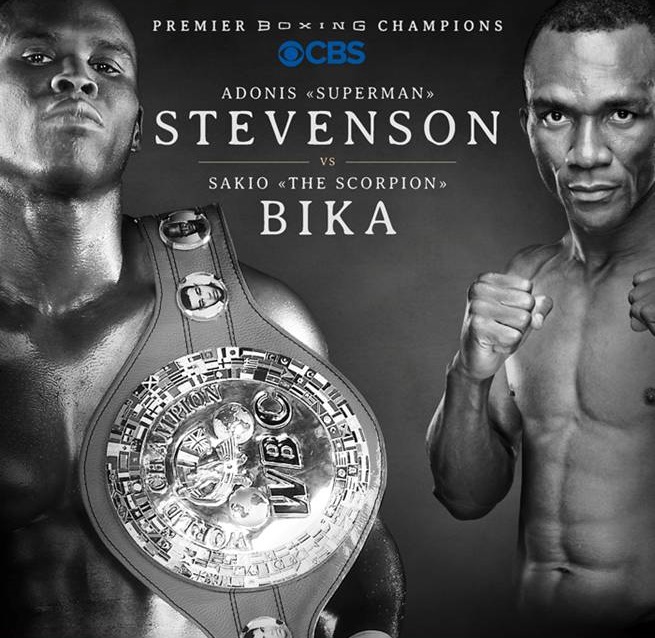 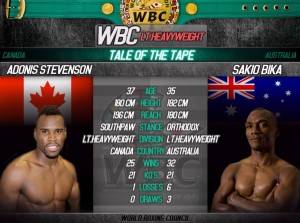 Adonis Stevenson defended his WBC light heavyweight title against Sakio Bika in front of a pro Stevenson crowd at the Pepsi Coliseum in Quebec City, Quebec, Canada. The fight was the main event for the first PBC series on CBS.

The fight started off in a pretty typical manner for both fighters as Stevenson felt out Bika and started off a bit slow, while Bika made it ugly and tried smothering any offense from Stevenson out the gate. Stevenson wasn’t as interested in picking his shots in the first, but as he settled in so too did his output.

Stevenson began to open up much more as the rounds progressed, although he wasn’t really pressing the action. Stevenson landed the same shot over and over and Bika didn’t really have an answer for Stevenson’s left hand.

In the 3rd round, Stevenson badly wobbled Bika with a left hand, but he managed to stay on his feet. That one shot opened up the rest of the fight for Stevenson offensively. For the remainder of the fight, Stevenson’s left hand was there for him and he plotted it behind the right jab. It was the same combination over and over, and yet Bika was a sucker for it.

Bika went down in the next round, but it was ruled a slip, even though it appeared as though he was truly hurt by a Stevenson left. Stevenson was redeemed in round 6 as he scored a knockdown on Bika, although this time it appeared to actually be a slip.

Stevenson finally scored a legitimate knockdown at the end of the 9th. Bika was getting hit hard, and he was producing very little offense, but to his credit he remained in the fight and never looked for a way out.

It might’ve been an opening given by Stevenson out of complacency, or Bika’s frustrations may have acted as a motivator, but in round 11 Bika landed his most significant shots in succession. Bika landed some loopy shots, but they were loaded up on, and he clubbed Stevenson hard. They weren’t shots that were enough to turn the tide in the fight, but they looked good to the Canadian crowd and they were enough to help Bika’s pride in a fight that he never stood a chance in.

Both men traded moments in the 12th and final round, but the fight went to the judges’ scorecards and they turned in the scores of 115-111, 116-110, and 115-110 for a unanimous decision win for Stevenson. The scores were probably a little closer than they should’ve been, but the decision was unanimous so who cares.

Stevenson was asked about his fight and what he thought of Bika and the questions regarding his own chin in the post-fight interview.