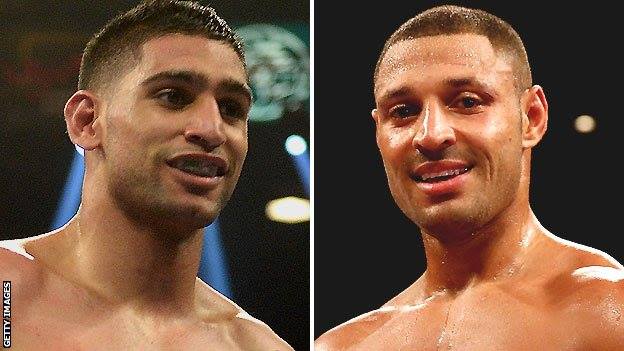 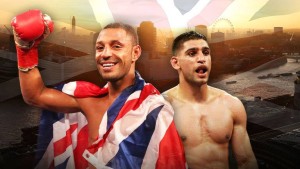 When Amir Khan announced his intent on fighting Chris Algieri, he had to know that there would be some backlash. It was the most controversial topic on last night’s Boxing Voice radio show. Very few consider the fight worthy of our attention and deem it as an unworthy proposition from a fighter content with avoiding dangerous fights with real welterweights. The feeling is that Khan is waiting out the winner of Floyd Mayweather Jr. and Manny Pacquiao.

I will have to agree with that viewpoint and shame on Khan if that is accurate.

The fight Khan should be taking is one with fellow countryman Kell Brook, who has been calling out Khan for years. This would be a significant fight, especially in the UK, but it has reached the heights of importance throughout boxing as a whole.

Brook has cemented himself as a real player, at least in consideration. Brook is just as likely to be the welterweight kingpin as say Keith Thurman. I’m not saying Brook is better than Thurman or could even beat him, but they’ve basically accomplished the same noteworthy attention on paper. Actually, Brook has a real world title so he may deserve more consideration.

Brook was a guest today on BBC Radio’s 5 live show, and we got his reaction to Khan’s call for an Algieri fight.

“He’s fighting Algieri who didn’t win a round against Pacquiao [and] who is a feather puncher—not a big puncher. It doesn’t make sense to me. I’m world champion; I’m calling him out. We want the fight. There is a world title there and a bag full of money. It don’t make sense that he’s fighting this guy who’s bringing nothing to the table,” Brook told the 5 live crew.

Brook’s comments were in direct contrast to Khan’s own statements regarding Algieri. During Khan’s video announcement, which was published on his wife’s YouTube channel, he sounded like a used car salesman as he misleadingly described Algieri in a way that gives this match the benefit of the doubt.

Khan said that Algieri was a hard puncher and that he was competitive in the Pacquiao fight, which is absurd on so many levels. I won’t discredit Algieri, and I believe he is a talented fighter, but he isn’t a welterweight and Khan should be fighting welterweights.

What makes this so much more difficult to get behind is that Brook is willing and able. The Khan-Brook fight makes so much sense. In fact, Khan himself has said that the fight makes sense and that he would fight Brook, but nothing has come from those words, and Brook was quick to remind everyone on the show.

“He said that he’ll fight me before, he said it many times, but it’s never happened. I don’t get why he doesn’t want to fight me. Wherever I go It’s always, ‘Amir Khan, when you going to fight him?’ It’s been going on for a long time.”

Brook seems confident about his chances and the bad blood between him, and Khan is at an all-time high. I don’t think Khan is scared to fight Brook, but that’s not how Brook sees things.

“He’s delicate around the whiskers. He knows I’m a big strong welterweight, and I’m coming for that chin of his and [there is] only one outcome in my eyes and I think their team knows it,” Brook said on the 5 live show.

Khan has stated that he wants to fight in late May. He wants to get in a fight before Ramadan, which starts June 17th and ends July 17th. Ramadan takes a physical toll on those that participate and it is understandable that Khan needs time to prepare, as well as the time to recuperate, but Brook believes that the timing is well within the scope of reason.

I can understand if Khan wants to build the Brook fight a bit more, after all, and as I previously stated, a fight with Brook is big money. However, Brook seems to think that there are other factors preventing a fight between Khan and himself.

“I think that he’s hoping to fight the winner of Pacquiao-Mayweather. They’re tied up with their world title, but there is only one other man with a world title, and that’s me. It’s so easy to be made, it’s just pick the phone up, have a word with my promoter, Eddie Hearn, and we could easily make that fight at Wembley. He’s going on about Ramadan, but it’s before Ramadan, June 13th, the window’s open for a big, massive fight at Wembley.”

Khan definitely needs to step up and fight a real welterweight contender, preferably one that is ranked in the top 5. If you look at all the options, then you realize that Brook makes the most sense. Brook is the best choice, but he is also one of the only choices within the allotted amount of time for Khan to consider before Ramadan. If Khan passes on the fight now, then Brook could conceivably pass up Khan in the pecking order that is the welterweight division.

How ironic, and sad, would it be if Khan avoided Brook out of some misguided attempt to keep the Mayweather/Pacquiao options on the table, only to be passed over for Brook? It could happen, and if Brook fights the best then he deserves it. If Khan continues down this path, then he deserves to be out of the picture entirely.