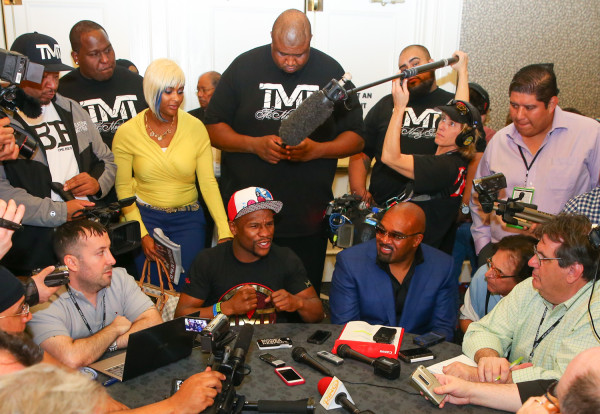 As Mayweather and Maidana go through the rounds of schedules press conferences to promote their September 13th rematch, fans and reporters have wasted no time in speculating what may occur before, during, and after the fight actually takes place.

One of the popular questions asked was how Mayweather views himself as an athlete compared to the superstars that dominate some other well-known sports. With seemingly transcendent figures like Lebron James and Lionel Messi, it’s easy for some to view Mayweather as overshadowed by other “super stars”. Still, Mayweather ignores the idea and instead thinks time will ultimately decide who the best athlete’s really are.

“Like I said before, only time will tell. That’s the only thing I can say. All I can do is continue to go out there and be the best that I can be, and just push myself to the limit.

Questions immediately became more relevant as Floyd was forced to address some of his major concerns and controversies going into this rematch with Maidana. With fans still focused on the “glove-gate” conspiracy, Floyd was quick to remind people of Maidana’s tendency to throw illegal shots, mainly low blows, during their initial meeting inside the ring. This led to questions of who exactly has been assigned to over-see the fight, and whether it is the type of referee who is willing to let those types of blows go ignored.

In a surprising turn, the big question focused less on Maidana, and instead on a fighter Mayweather had already defeated, Miguel Cotto. Following his absolute demolition of Sergio Martinez, fans are now clamoring for Mayweather to rematch Cotto. After all, Cotto was the last fighter to up a competitive performance against Mayweather, and following his most recent performance many believe Cotto is even more capable of handing Mayweather his first loss. It’s a(n) intriguing match-up, but one that Mayweather refuses to set his sights on just yet.

“Slow down. Like I said before, Cotto’s done a hell of a job, but we saw what happened when he faced Floyd Mayweather, not taking anything away from Cotto. He’s a solid competitor, but once again, when Floyd Mayweather beat Cotto they said he was washed up. I mean, that’s what they said. Then he comes back and wins and they say he’s born-again. I beat Marquez after taking a vacation, and then he goes and knocks Pacquiao out and now they say Marquez is back again, but when I beat him they said he was over the hill but that’s how it is. Like I said before, I’m not just fighting my opponent, I’m fighting everybody else also.”