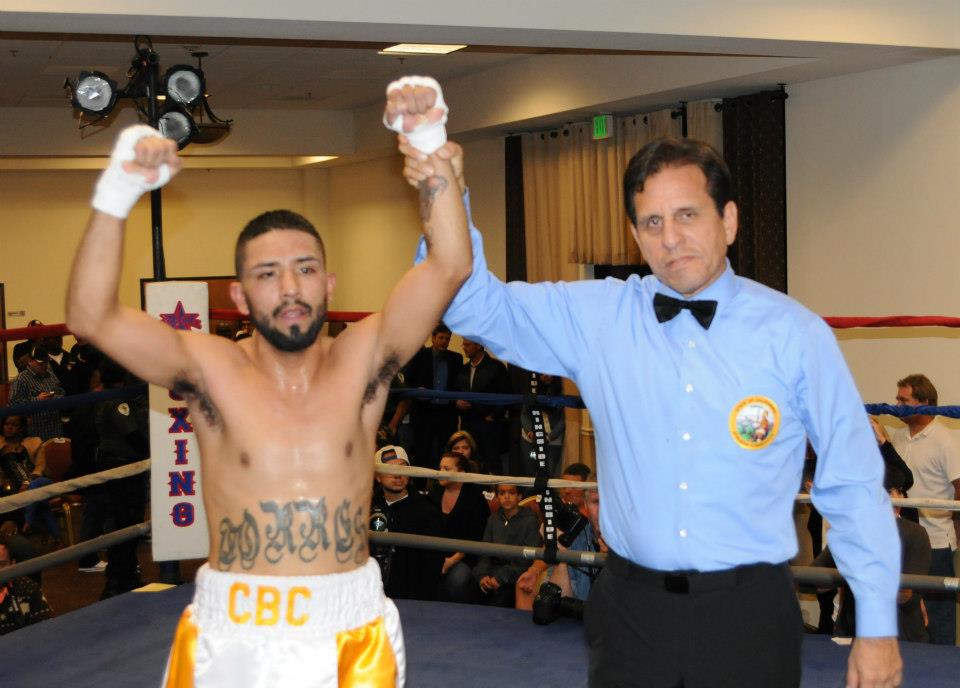 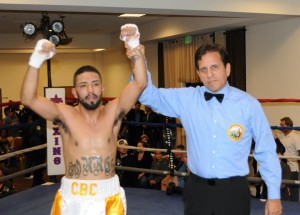 Exciting featherweight prospect Alberto Torres (4-0-2 1KO) of Sacramento, CA will return atop a stacked September 27th card in Rancho Cordova, CA when he takes on Anthony “Lights Out” Smith (1-2 1KO). For Torres, this will be his fourth bout in the Sacramento area, where he is currently undefeated, with his last appearance on October 12, 2013 resulting in a knockout win over Percy Peterson of Stockton, CA. Torres is a faced paced action fighter who recently went down to Oxnard, CA picking up a draw against undefeated Daniel Franco earlier this year in a thrilling fight. Smith on the other hand has been featured on multiple videos pertaining to the Mayweather Boxing Gym in Las Vegas, NV on the internet and is viewed as a tough test for anyone as well as the fact that both fighters like to provide a heavy dose of inside fighting.

The card will also featuring the return of featherweight John Abella (5-0-1 3 KOs) of Sacramento, CA who will be facing his toughest challenge to date as he faces Jesus Sandoval (3-3-3) of Redwood City, CA out of the Gladiators Boxing Gym. Abella will be coming off a one year hiatus since his Northern California Fight of the Year with Christian Cartier and looks to be the front runner for the award again as Sandoval is never in a bad fight and neither is Abella. The big question will come down to how will the layoff effect John Abella and how will Sandoval respond after suffering back to back losses for the first time in his career most notably, a horrific KO loss to Cesar Valenzuela to start the year in February?

Also featured on the card is cruiserweight Ryan “The Rhino” Bourland of Vacaville,Ca, who is the busiest man in Northern California boxing taking his third fight in give or take 60 days. Bourland has earned two stoppage wins against two undefeated foes in Ray Mesa and Phillip Smith in the course of 30 days or so. Bourland, a knockout artist as well as a major draw in Northern California is looking to stay active and build an even bigger fan base around his crowd pleasing style.

Eric Altramirano of Concord, CA will make his professional debut after years of accolades in the amateur with numerous distinctions across a ten plus year career in the amateurs facing a who’s who list of talent. Altramirano, who was featured on ThaBoxingVoice.com YouTube channel earlier this year is a product of Gary Sullenger and has been with Concord Community Youth Center for many years and looks to be a force on the professional scene. As Altramirano noted in the spring when I interviewed him, “Trophies are nice, but at this point I would like to get paid for my hardwork.”

Nonito Donaire Sr. trained fighter, super featherweight Adam Fiel of Vacaville, CA will finally return back to the ring as he was set to make his return in August until a medical suspension of his opponent stopped his plans to step foot in the ring. Fiel, who has been featured on Top Rank cards in the past year is a prospect worth looking for as well as he returns to face Carlos Gonzalez. Fiel is also a knockout artist who throws leather with bad intentions with  each shot.

Also on the professional card will be the debut of  Eric Smith. Junior middleweight Luis Cruz of Sacramento will face Cesar Renteria  in his professional debut. Luis Cruz had a tough fight last year against Miguel Lopez of Oakland, CA which was ruled a draw , but many felt as though it should have gone to Lopez. This fight, after a year layoff, will show where Cruz is at in the pro game. Rounding out the professional portion will be Oscar Vasquez of Reno, NV.

The location of the fight will be the Metro City Soccer, 11327 Folsom Blvd. Rancho Cordova, CA 95742 on September 27th. Doors open at 3PM,with the first fight at 4PM and the professional card starting at 6PM. Tickets are priced at $40 general admission and $50 for ringside. For ticket information please visit Salon de Belleza Carisma on 6201 Franklin Blvd Sacramento, CA or visit Caballero Boxing either in person at 35 Quinta Ct Suite D Sacramento, California or contact them via the allotted Facebook page with the link that follows: https://www.facebook.com/pages/Caballero-NorCal-Boxing/352341704813025?rf=200896063269672