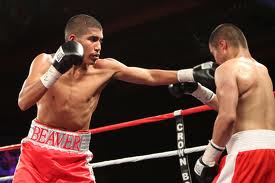 “I feel real good, [the] fight is three weeks away, training camp has been going really good and we are excited to get back in the ring, go back home and fight in Arizona again.” said top Iron Boy Promotions bantamweight prospect Alexis Santiago (16-3-1 7 KOs). Santiago has recently ripped off a five fight winning streak under the Iron Boy promotions banner and even more so are some of his foes beat such as Hanzel Martinez (20-2 16 KOs) and Alex Rangel (15-3-2 9 KOs). The Martinez win in particular was very impressive as Martinez is known for his explosive power and ability to end fight before the allotted time that both fighters had contractual agreed upon and Santiago outworked Martinez in his best performance to date.

“When I fought Roman [Morales] I was at 122 lbs. and to be honest I am a small 122 lbs. 118, I feel great at 118 lbs.” Santiago explained that just dropping a few pounds made all the difference in his career over the past few years. Roman Morales is the last loss that Santiago suffered in his career and since dropping in weight things have been ideal. “My last two fights were real tough opponents and I feel I did great. My confidence right now is really good actually.”

At the time of the interview, Santiago was in between opponents he would be facing fight night, but explained, “We’re really prepared, we have seen a lot of different styles, we are real confident with the work we can do. It’s about getting the opponent and to be honest it doesn’t matter who it is, we just want to get in the ring and fight.”

Santiago, who prior to this fight booking was planning to fight July 30th in Puerto Rico against Emmanuel Rodriguez  took just one week off once getting this fight booking and the aforementioned fight fell through. “Fighting at home always motivates me,” the fan favorite Santiago explained as he is one of the bigger draws in the region.

“We are going to get another win, decision, knockout, it doesn’t really matter. We are just going to go in and if the knockout comes it comes,” Santiago explained when asked to predict the fight. Alexis Santiago will be on the main card portion of Iron Boy 14 live at the Celebrity Theater in  Phoenix, Arizona which will be televised on UniMas as part of the ‘Solo Boxeo’ programming. For ticket information please visit IronBoyPromotions.com or http://celebritytheatre.ticketforce.com/ordertickets.asp?p=1571