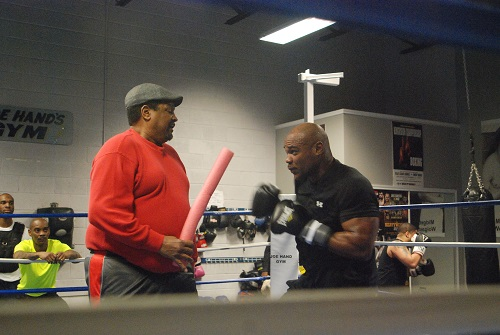 Philadelphia, PA: Yesterday members of the media gathered at the Joe Hand Boxing Gym in Philadelphia, PA for Amir “Hardcore” Mansour’s (20-0-0, 15 KOs) workout where the heavyweight claimed to be in the best shape of his career as he gears up to defend his USBA Heavyweight Title against Philadelphia’s own Steve “USS” Cunningham (26-6-0, 12 KOs) Friday, April 4 on NBCSN Fight Night live from the Liacouras Center in Philadelphia at 10:00 PM ET/7 PM PT.
Despite being undefeated, Mansour, 41, of Wilmington, DE has been struggling with health issues his last two fights. In his last fight he stopped Kelvin Price in the seventh round at Resorts International Casino and Hotel in Atlantic City, NJ on December 14, 2013. However, he said, “I was about 60% my last fight. I had a fracture in my wrist. Believe it or not the day I fought Price I could not do a push up. I almost failed the physical when the doctor asked me to do a push up so I had to do it on my fist. That is how little power I really had in my right hand. Even a month after the fight I couldn’t grip the pads.”
Prior to his fight with Price, Mansour won his USBA Heavyweight Title when he defeated Maurice Harris at Dover Downs in his home state of Delaware on August 23, 2013, only several days after battling the flu. He said, “When I fought Harris I was 208 pounds. I went from 229 to 208 in about nine days. I was in the emergency room about six days before the fight. I really should not have taken that fight but I am a fighter. That’s what I do.”
Now Mansour has allowed his body time to heal and claims he is in the best shape of his career. He said, “I took off and they gave me a nice rest. I got some braces for my wrist and my hand. This is really the first fight that I have been injury free probably in my whole career. And, as far as conditioning is concerned, I got a very strong twelve rounds in me.”
His challenger, two-time cruiserweight world champion Steve “USS” Cunningham also claims to be in great shape, “This camp has been grueling. Brother Naazim [Richardson, Steve’s trainer] has been really taxing on my body. We have been putting different stuff in there. We feel very confident that we are going to get in there and do our job which is to win.”
Mansour does not think Cunningham will be able to survive 12 rounds with “Hardcore.” He said, “I’m on my mission I am not going to let somebody that has had several chances already to become successful in this sport take my chance away from me. I don’t think he is going to last and if he does you might see a real damaged guy. I just hope to God that he is ok after the fight, that he can fight another day or just walk and talk normally. If he goes that distance with me, it is going to be brutal. I have trained hard for this fight. I am good and ready. I am going to this fight with my A game and to give it all I got. There is not a heavyweight on this planet that can go the distance with me because they are just not ready to go to hell and back and I am.”
Amir’s promoter, Joe Hand Jr. President of Joe Hand Promotions, said “We are very happy with the training camp he has had.  He is as healthy as he has ever been in his career. We are grateful to Main Events for giving him this opportunity and to Steve Cunningham for taking the fight.  We promise this will be the best Amir Mansour anyone has ever seen.”
Tweet