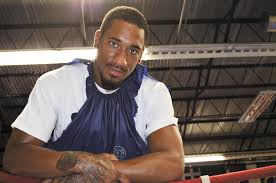 Negotiations are ongoing between Andrade’s co-promoters, Banner Promotions and Star Boxing, with Top Rank and HBO officials regarding a potential fight for a vacant WBO middleweight title fight against No. 1 contender and unbeaten Russian Olympian, Matt Korobov.

“We want to thank all of loyal fans for their support,” Andrade’s head trainer and father Paul Andrade said. “They are the only ones who understand how our backs have been put against the wall. Everybody in boxing seemed to react to the news about Demetrius fighting Korobov for the vacant 160-pound WBO title. I’d like to get the facts straight. We were not aware of that fight, nor were we aware of the petition to the WBO to move up to fight for its middleweight title. I spoke to Artie Pelullo (Banner Promotions), who informed me that an opportunity had popped up, and that he wanted to beat (Bob) Arum (Top Rank) to the punch. He couldn’t get a hold of us in advance but he has left us an option to take a fight.

“Demetrius is a warrior and we don’t walk away from good fights. As a matter of fact, we run towards fights others run away from. We will accept the fight against Korobov, provided Demetrius is paid at least the bare minimum, according to his contract. Negotiations are going on right now. It’s a shame that two days after the WBO selected Demetrius to fight Korobov for the middleweight title, the top 154-pounders came out of the woodwork to start making fights. I guess real men are in the middleweight division. It looks like ‘Canelo’ is going to fight Joshua Clottey,(James) Kirkland is fighting (Gabriel) Rosado. Nobody at 154 pounds would step-up and to challenge Demetrius for his WBO title belt.”

Andrade was particularly upset with Oscar De La Hoya for using Andrade by announcing he was one of three candidates to fight Alvarez. “No disrespect to Clottey, who was a great 140 and 147-pounder, but which fight would the people paying for tickets like to see: Alvarez vs. Andrade or Alvarez vs. Clottey,” Andrade asked rhetorically. “I guess ‘Canelo’ isn’t interested in trying to regain a 154-pound world title belt. I want to let everyone know that we’re still open to fighting ‘Canelo’ if he is willing to step-up to fight Andrade. He wants a soft fight to set-up a mega-fight with (Miguel) Cotto. Demetrius is too high risk for the top 154-pounders to fight. It’s like pushing a rock uphill. Oscar never should have said Demetrius was on the short list to fight ‘Canelo’ because he didn’t mean it. We’re not letting them off the hook, though. We haven’t signed to move up to 160 yet and we’re open to fighting ‘Canelo’ at any given time. And if ‘Canelo’-Clottey is made, it’s only going to be just one more disappointing night of boxing for fans. “

Andrade remains baffled about why some of the top junior middleweights have avoided his son like the plague. “The closer we run to them, the faster they run away from us,” Andrade continued. “It’s like trying to put two magnets together from opposite ends. I guess a world title fight doesn’t mean much to them.

“In the past, we were criticized about opponents we fought, but that was when Demetrius was a fighter in development. School is out, we’ve graduated. We’re willing and able to take on all challengers for Demetrius’ 154-pound world title belt. Why aren’t these guys criticized for not taking a fight with Demetrius?”