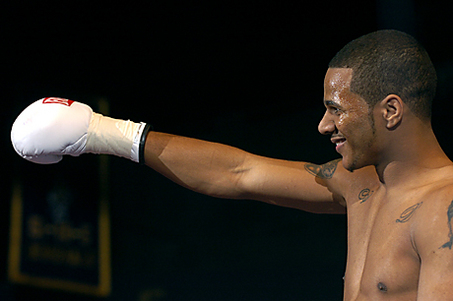 NEW YORK (Nov. 20, 2013) – Unbeaten Anthony “The Dog” Dirrell, who is no stranger to overcoming adversity, finally gets his crack at a world title when he challenges defending champion Sakio Bika for the WBC Super Middleweight Championship on Saturday, Dec. 7, live on SHOWTIME (8 p.m. ET/5 p.m. PT) from Barclays Center in Brooklyn, N.Y.

The quadrupleheader, headlined by an all-Brooklyn bout between former world champions Zab “Super” Judah and Paulie “The Magic Man” Malignaggi, is the first of back-to-back blockbuster events promoted by Golden Boy Promotions live on SHOWTIME. On Saturday, Dec. 14, in another four-fight telecast on SHOWTIME CHAMPIONSHIP BOXING®, rising superstar Adrien Broner will defend his WBA Welterweight Championship against dangerous, hard-hitting Marcos Maidana in the main event.

For Dirrell (26-0, 22 KO’s), of Flint, Mich., the world title fight caps a remarkable journey for the 29-year-old, whose eight-year-professional career has twice been seriously jeopardized; the first time in December 2006 when he was diagnosed with cancer and sidelined for 20 months. At the time of his diagnosis with non-Hodgkins lymphoma, Dirrell was 12-0 and had been boxing professionally for only two years.

After winning his battle with cancer, he rose to No. 1 in the WBC and No. 2 in the WBA in 2011. He had become an established star and was readying himself for a shot at a world title before getting into a motorcycle accident in May 2012 that would keep him out of the ring for 17 months.

Dirrell will be fighting for the third time since the accident when he faces Bika (32-5-2, 21 KO’s), who is making the first defense of the 168-pound crown he captured with a majority 12-round decision over Marco Antonio Periban last June 22 on SHOWTIME. The current WBC No.8-ranked contender, Dirrell triumphed by third-round TKO over Anthony Hanshaw in his most recent outing last July 27.

Here’s what the athletic, switch-hitting Dirrell had to say about his career, personal setbacks and upcoming bout against Bika:

(Did you think your career might be over after the motorcycle mishap?)

(Thoughts going into the Dec. 7 world title fight that will open the SHOWTIME telecast)

“The key for me is to stick to our game plan and to go in and dominate the guy. I’m really going to try and take him out. I don’t want to leave it in the judges’ hands.

“I definitely think he’s underestimating me, probably because I haven’t had a lot of rounds (Anthony has only gone eight rounds one time, and all of his knockouts have come in five rounds or less). But I’m prepared mentally and physically and come Dec. 7 the world will realize that I’m a champion and not just a contender.”

(Your road to a world title fight has been anything but easy. What does it mean to finally be fighting for a world title?)

“It’s a great thing, my dream coming true, a dream I’ve had since I was a little kid. But it can’t be complete until I win. I’m finally at the door and I’m going to bust it down. All the hard work I’ve put in, actually there’s no need to bust it down. I’m just going to walk right in and get my championship.”

(What do you think of the vastly more-experienced Bika, who has fought the likes of Joe Calzaghe, Lucian Bute and Andre Ward?)

“He’s a good fighter, a champion. You can’t take anything away from that. But at the end of day I feel I have better skills and boxing ability. All I have to say is he’d better be on his ‘A’ game.”

(What did you think of the Bika-Periban fight?)

“It was a close fight, one that could have gone either way. Neither guy was impressive. I’m a different kind of fighter than Periban so I expect Bika to be training better and harder for me.”

(With a victory, do you think you’ll finally get your due and escape your brother Andre’s shadow?)

“People keep talking about me being in Andre’s shadow, but I don’t mind. His casts a big shadow. In my book, he’s a world champion. He beat Carl Froch and he beat Arthur Abraham. If I have to stay in his shadow the next 10 years, I don’t mind. I have to do what I have to do to win this championship. I’m my own person.”

“I’ve been training at the ABC Gym in Boca Raton, Fla. I’ve done a lot of sparring and running. Camp has been wonderful, hard and very intense.