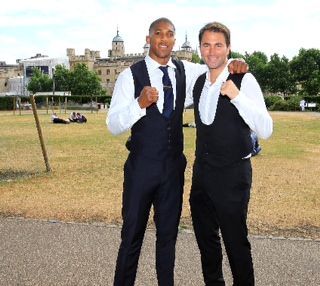 Anthony Joshua MBE has vowed to pour his heart and soul into matching his amateur achievements in the pro game as tickets go on sale for his professional debut at The O2 in London on October 5, live on Sky Sports.

“I’m so determined and so willing to sacrifice anything and everything to achieve my dreams,” said Joshua, who will be trained by Tony Sims in Essex. “It’s great to be back in the ring and it’s a privilege to debut at The O2, it’s one of the best venues in the World.

“Eddie advised me to look at all the offers. I went around the World took advice from champions and talked through with the team. Matchroom is the best place for me to go on the path I want to take, they’ve got a great stable of fighters and it’s great to box on Sky Sports.

“I’d like to thank Finchley ABC and GB Boxing – they have backed me all the way, taking me from complete novice to World number one and Olympic Gold. The have given me the foundations to move into the pro ranks, the basis to become number one in the World.”

“Anthony is the perfect man to lift the sport of boxing in Britain even higher,” said promoter Eddie Hearn. “We have two gold medallists now in Anthony and Luke, when a heavyweight wins a Gold they are a huge target, it’s been a long process getting Anthony’s signature but it’s been well worth it and he’s got a great team and family around him –  he was right to take his time and make the right decision.

“We will take Anthony forward at the right pace. Anthony is very grounded and he understands the road ahead. He’s achieved an incredible amount in 43 amateur fights, but what impresses me more about him is his mental capacity – he has a great head on those broad shoulders and he won’t be rushed.”