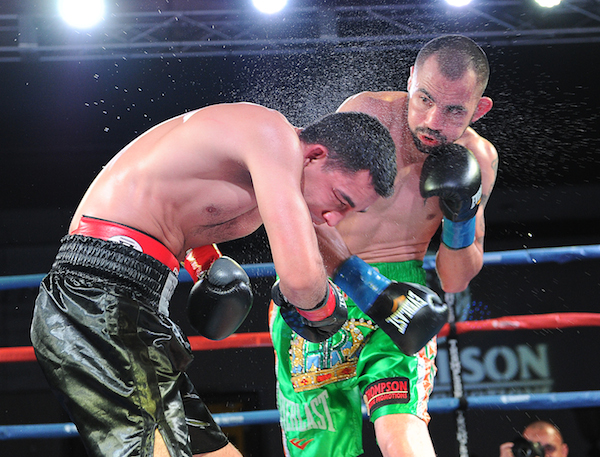 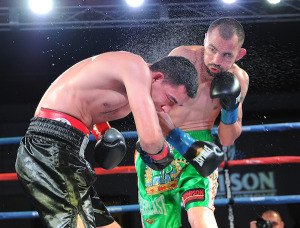 Thompson Boxing Promotions wrapped up its promotional year with a stellar night of boxing highlighted by knockouts in the main and co-main events. Welterweight Artemio Reyes (23-2, 19 KOs) of Colton, Calif. has won nine straight – eight by KO – after knocking out the durable Christopher Degollado (10-4, 8 KOs) of Monterrey, Mex. in the seventh round.

“I knew my punches were having an impact and I felt him getting tired as the rounds wore on,” said the 28-year-old Reyes. “It was only a matter of time before I finished him off.”

Reyes, who has become accustomed to knocking out opponents inside of three rounds, had to work a little harder for this KO win. Degollado had a solid defense and it took Reyes a few rounds to figure out his weaknesses. Reyes pressured Degollado into corners and transitioned well from counter punching to attacking on the inside.

In the co-main event, Jose Roman (19-1-1, 13 KOs), one of the rising talents in the lightweight division, took home his fourth win of the year in the “Locked n’ Loaded” 8-round co-main event. Roman knocked out Jose Luis Ramirez, Jr. (7-2-1, 4 KOs) of Tijuana, Mex. in the third round with a right hook to the head. In the previous round, Roman connected with a left hook that dropped and dazed Ramirez.

“It was important for me to close out the year with a solid win and I did just that,” said the 26-year-old Roman, who lives in Garden Grove, Calif. and trains with Joel Diaz. “I look forward to staying busy next year and can’t wait to fight on another Thompson Boxing card.”

In a fight that was largely fought on the inside, top bantamweight prospect Carlos Carlson (16-0, 10 KOs) of Tijuana, Mex. extended his unbeaten streak by outpointing the veteran Miguel Tamayo (15-10-2, 13 KOs) of Ciudad Obregon, Mex. Scores read 60-54, 59-55, 60-54. Carlson is managed by Roberto Sandoval and trained by Danny Zamora.

Super featherweight Erick Ituarte (9-1-1, 2 KOs) of Santa Ana, Calif. is not known for his overwhelming force, but on Friday night, he peppered Jesus Angulo (3-6, 2 KOs) of Nuevo Laredo, Mex. with a constant flow of heavy punches. Ituarte routinely backed up the taller Angulo and closed the book in the third round with a series of combinations that proved too much for the Mexican-native.

The night started with an excellent back and forth affair between heavyweights Siala Siligoa (2-2, 2 KOs) of San Bernardino, Calif. and Rodney Hernandez (3-1, 2 KOs) of Modesto, Calif. Siligoa, also known as “Mighty Mo,” got the action started early in round one with an overhand right that put Hernandez on his wallet.

Hernandez, however, worked his way back into the fight by pushing forward and landing quality lead rights and left hooks. The judges awarded Hernandez with a unanimous decision win with scores of 38-37 all around.