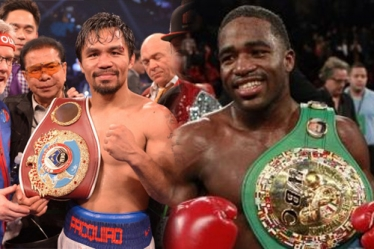 The search for a Manny Pacquiao opponent will likely come down to whoever wins the fight between Juan Manuel Marquez and Mike Alvarado this Saturday. However, during the Mayweather-Maidana fight week, a new foe threw his name in the ring.

Adrien Broner, who most recently was defeated by Marcos Maidana and beat Carlos Molina two weeks ago, said he would love to fight Manny Pacquiao.

Bob Arum, Pacquiao’s promoter thought it was funny but says Broner needs to rebuild himself before he can even think of a Manny Pacquiao fight.

“A 4 round fighter can say they want to fight Manny. Broner has to prove he has credentials. I mean Broner was destroyed by Maidana, he struggled against Molina. Now maybe he has the ability to become an A level fighter but let him prove it first before we go out saying he should be an opponent for Manny,” explained Arum

Broner lies on the other side of the cold war, so a fight with Pacquiao is just wishful thinking. But Pacquiao will be fighing in Macau and he has different options on his opponent.

“The winner of Marquez-Alvarado is the big possibility, maybe Ruslan Provodnikov is a big possibility. There’s alot of guys out there that will be being considered.”