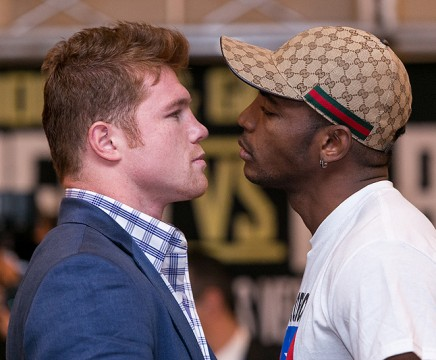 In March of this year, Jr. Middleweight star Saul “Canelo” Alvarez brutally destroyed Alfredo Angulo to earn his 43rd victory and 31st win by way of knockout. Just hours after the fight, Canelo didn’t even have a chance to relax and enjoy his win, when he was once again on the defense but this time outside the ring. During the post fight press conference, Erislandy Lara decided to no longer just talk on Twitter when he interrupted the conference ‘Clubber Lang’ style to call the former World Champion out.

On July 12 at the MGM Grand, Erislandy Lara will get what he asked for when he takes on Canelo Alvarez at a catch weight of 155, one pound above the Jr. Middleweight limit of 154. Although during the press conference Canelo wrote off Lara’s tirade as a failed attempt for attention, just weeks after the confrontation he selected the Cuban to be his next foe inside the ring.

Almost every day on Twitter Lara would post many pictures and tweets about his desire to fight Canelo and he was candid about how he felt that the Mexican superstar was “ducking” him. Soon after, Canelo’s fan base demanded that he take the fight and show Lara once and for all who the king of the 154 division is.

“I took this fight is because the fans ask for it. My fans ask me to fight him because all the stuff he was talking on twitter and social media. He was talking so bad about me, that my fans asked me to shut him up,” stated Canelo.

Both Canelo and Lara have two common opponents. Canelo subsequently beat Angulo better and more impressively because when Lara fought Angulo. He was knocked down twice before stopping him late in the round. Canelo basically battered Angulo from start to finish before stopping him in the 10th. Now jump to Austin Trout. Canelo has a tough fight with Trout and some even think that fight could have been scored a draw or even a win for Trout, while Lara out boxed Trout with easy back in December of last year. Canelo makes no qualms about it, he understands that not only is he fighting for his pride but that he is fighting what could be viewed as his biggest threat currently in his division.

“It is going to be a little dangerous, but you have to go in there aggressive and think. You have to be smart.”

Not too long ago, listening to ones fans based backfired and blow up in the form of looping and overhand punches in the face of Adrian Broner. It’s hard not to compare this situation, as at the time boxing fans were demanding him to step up to the plate to take the Marcos Maidana fight. He went on to lose that fight in a bad way smearing image. Although the comparison can be made, Canelo thinks that not only is he a different fighter but also this situations is not the same, he stated, “It’s totally different. I don’t even think about that”