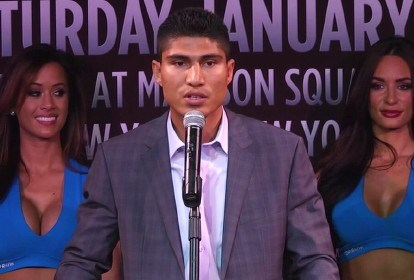 Not many people saw the law suit filed from Mikey Garcia suing his promoter, Top Rank Promotions, coming last month. By most accounts in the industry, Mikey Garcia was paid very well and was in line to possibly get a Manny Pacquiao fight in the future. However, after long negotations that fell throught with Yuriorkis Gamboa, Garcia filed suit against his promoter and his return is unknown. His promoter Bob Arum feels he’s just listening to the wrong people.

“The problem is the fighters who show discontent are those who have people buzzing in their ears. Some are foolish enough to listen to those people. I think Mikey will hopefully come around because if he doesn’t, the train will leave without him,” Arum told ThaBoxingVoice.com.

When the Gamboa fight fell through, the ease of making a Terence Crawford-Yuriorkis Gamboa fight made it seem like the fight between Mikey Garcia and Gamboa didn’t happen because of Garcia. Arum believes Garcia ran with a lie someone told him and that’s why he is on the shelf.

“Mikey was told an untruth about how much Gamboa was getting in the fight. Mikey then said taking it as the truth, that if Gamboa was getting that much money that he wanted the same or more. But the truth is that it wasnt the case.Gamboa is a big name but he and his promoter were getting the same money that Garcia and Top Rank were getting. He just listened to a lie without checking. But i think he’ll come around.”

A name that has come around and wants to do business with Arum is his former fighter, Oscar De La Hoya. With all the rumors circuling of a Golden Boy rift, Arum decided to take the high road and not comment on the situation.

“Oscar is a friend of mine and there’s no problem with us making fights together. As far as Richard breaking away and taking Golden Boy fighters, thats a legal issue, i don’t want to get involved.”