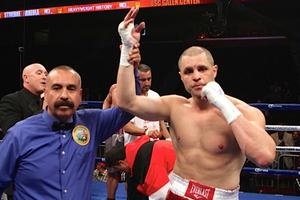 LAS VEGAS (May 15, 2014)–This past Saturday night at the Galen Center in Los Angeles, Cruiserweight contender BJ Flores scored a spectacular 1st round KO in a bout that was scheduled for six rounds. Collins hit the ground after a picture perfect right hand of Flores connected in the very first round.

Flores of Las Vegas upped his record to 29-1-1 with 19 knockouts and looked sharp despite coming off a 17-month layoff.

“I have the power, speed and talent and its finally time to put it all together. I have had some business opportunities over the last two years that have kept me away from the ring but now I have the team in place and boxing has my full attention. I am ready to fulfill my potential. I have the perfect team in place to make sure I get those oppurtunities in the immediate future”.

“I want to thank my team. The next year is the most important of my boxing career. All I want to do is get right back in the gym and prepare for my next fight. I have never had the luxury, since very early in my career of fighting and immediately having another fight scheduled in the upcoming weeks. My new team is taking care of all the outside the ring details and that allows me to focus only on training. I have nothing more to say. I will do all my talking in the ring”, said Flores.

Flores, who has been drawing rave reviews as a ringside commentator on the NBC Sports Fight Night series, is ready to start making big noise in the Cruiserweight division.

Advisor Louie Decubas jr. says “BJ is an explosive fighter and he proved that again on Saturday night. BJ has shown very good power and speed and people are going to be very surprised when he continues to score KO’S as he moves up in opposition. With his amateur background and Great chin we feel he matches up with ANYONE in the division. We have some very big plans for him in the next few months. ”