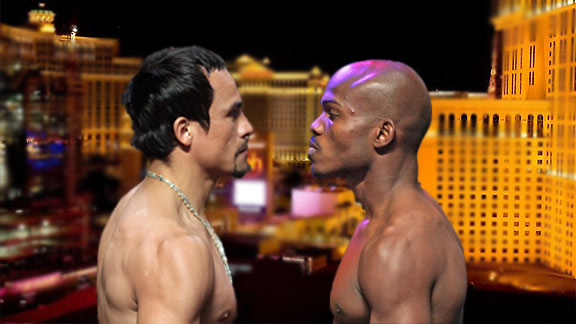 For a few weeks now, there has been much drama involved in regards to the big Juan Manuel Marquez vs. Timothy Bradley fight. Bradley has been in the media stating that in his contract it states that there would be random drug testing done by VADA or USADA, an organization outside of the Nevada  State Athletic Commission .  Marquez stated that he would only agree if there was a rehydration limit for Bradley the day off the fight. Bradley to that notion has threatened not to fight should his contract agreement not be met.

Top Rank Promoter Bob Arum was in New York for the Manny Pacquiao-Brandon Rios press conference and spoke to me about the topic of drug testing for this fight.  “Drug testing is under the contract and it will be conducted by the Nevada State Athletic Commission and they will be hiring and independent agency to do it, that’s what the contracts states and that’s what will be carried out,” Arum told ThaBoxingVoice.com

Now what agency would be conducting the testing, Arum reiterated that it would be an independent agency but would not get to specifics.

Regarding Bradley’s comments about the VADA and USADA testing in his contract and not the NSAC testing, Arum stated, “Well he should reread the contract because it clearly states that in there.”

When speaking to President of Top Rank Promotions, Todd duBoef, he shared the same sentiments, that Marquez-Bradley is a go with everyone being on board.

“It’s absolutely a go and we’re moving full board ahead and everyone’s on board. That matchup is such an intriguing matchup, two incredible fighters that are really going to challenge each other to see who’s at the peak in their career.”