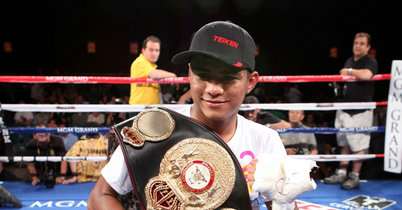 Roman Gonzalez has had a slow start this year. He has fought only once this year and since then has waiting patiently for an opponent but the amount of worthy opponents that are willing to face him are slim, unlike his patience.
Yes Gonzalez has been getting anxious to fight, this is how the man makes a living. He brought himself up from nothing and became something. Finally the patience is paying off.
Gonzalez may be fighting in Japan in November and the opponent that is being discussed is WBA regular flyweight champion Juan Carlos Reveco. Although the deal is not final for the Reveco fight there is another fight on the horizon for Gonzalez.
One of the closest members to Gonzalez has told me that Gonzalez may fight in Mexico this September against an opponent yet to be determined. The fight will take place at 112 pounds as mentioned in an earlier article on ThaBoxingVoice.com .