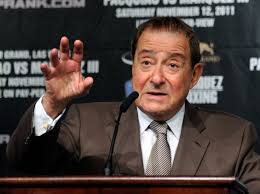 At the start of 2013, 2 time Olympic gold medalist Zou Shiming was the butt of everyone’s jokes. Coming off the 2012 Olympics, he was put on our HBO 2 air in 4, 6, and 8 rounder’s. Shiming is a star in China and is the reason Top Rank has staged fights in Macao. They even had their cash cow Manny Pacquiao fight there twice.

Shiming who is trained by Freddie Roach has made grand strides and won his first 12 rounder on the Pacquiao-Algieri undercard.

Now he’s ready to challenge for a world title.

Steve Kim of Boxingscene.com reports that Shiming’s return has been pushed back to March 8th but indeed he will challenge IBF flyweight champion Amnat Ruenroeng.

Shiming suffered a cut to his eye in his last bout and that’s the reason his title fight was pushed back.

Arum told Kim, “Zou could go in February but to be safe we had to change the date to March 8th.  I didn’t want to take the chances of keeping February 14th and then the cut opens or something. This gives him 4 extra weeks to make sure he’s ok before he starts sparring. It’s probably unnecessary but it’s such a big fight in China that I just wanted to be safe.”