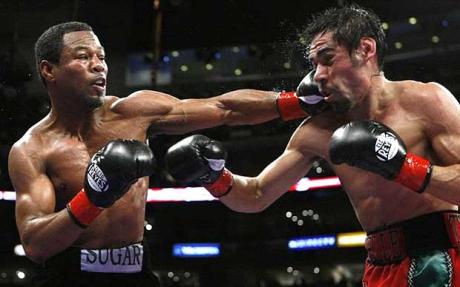 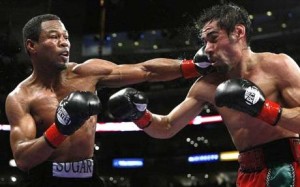 Boxing legend ‘Sugar’ Shane Mosley looked phenomenal in his sixth-round knockout of Ricardo Mayorga at The Forum in August.

After Mayorga suffered a bad cut on the right eyelid in the fifth round, both fighters came out for the sixth in what turned out to be the most exciting round of the fight, and the last one.

Mosley dominated with stiff jabs and right hands throughout the battle, but Mayorga had staged his biggest rally of the fight and had seemed to find his groove, until a well-timed liver shot brought him back to where he finished his first fight with Mosley in 2008, on the mat.

At one point in the Mayorga rematch, Mosley landed a solid shot upstairs that broke Mayorga’s mouthpiece, which broke four of Mayorga’s teeth.

Mosley is a part of a dying breed of boxers who circumvent politics, exhibit a ton of balls, and are always willing to fight the best.

At the age of 43, the former three-division world champion is still willing to fight guys like the now retired Floyd Mayweather Jr., Manny Pacquiao, and now the hard-hitting Russian, Ruslan Provodnikov.

While some may laugh at the thought of these occurring, keep in mind that Mosley still has a ton of power behind those fists, and a plethora of experience.

Prior to the Mayorga clash, Mosley had a chance to spar with former IBF World welterweight champion Shawn Porter, who left having appreciated the art more.

“What I learned and respect about Shane is he’s able to use offense and defense along with the professional techniques of holding, stopping you from punching, being able to stay away and not allowing you to hit him with flushes like you’re used to,” Porter said to Tha Boxing Voice’s Sean Zittel.

With WBC Silver welterweight champion Amir Khan turning down fights against Mosley and Provodnikov to pursue a fight against Pacquiao, Mosley has set his sights on fighting Provodnikov, which has some people legitimately concerned.

“Khan said no to @RuslanProvod & backed out of the fight with me to try for Pacman. So I hit up Ruslan &, and he’s down 2 go. What do u all think?” Mosley questioned his Twitter fans.

Mosley has received mixed responses from fans. They range from, ‘Are you insane!?’ to ‘Dang, you’re not afraid of anyone!’

However, the difference was that many thought Hopkins was going to pull off the victory because of his experience and the fact that Kovalev was only seen as a power guy.

It turns out; Kovalev was quite the boxer/puncher. Under the tutelage of former world champion John David Jackson, Kovalev has evolved into a fighter with the tools to be one of the best pound-for-pound fighters in the sport.

In the end, Hopkins was beaten from pillar to post but finished the fight on his feet. Unlike Adonis Stevenson, Hopkins took the fight.

Mosley undoubtedly fits in that class, too.

In a sport now dominated by politics and sidestepping, fighters who forgo politics in favor of fighting the best, deserve all of the credit from everyone from the fans and the reporters down.

Ruslan Provodnikov hits tremendously hard, but he doesn’t have the tools of a Kovalev. He simply comes forward and fires bombs with really no sense of defense.

This could fall right into Mosley’s back pocket if he can fight a smart fight, but the tables can turn in an instant if Provodnikov puts Mosley on the canvas.

Provodnikov gave Timothy Bradley a concussion; he obliterated the life out of Chris Algieri’s right eye, and he gave Lucas Matthysse a potential Fight of the Year in April.

Win or lose, Mosley is a legend in the sport. But with a win, his status as a legend goes up that much more.

Besides, Mosley doesn’t run from fights; he runs to them.