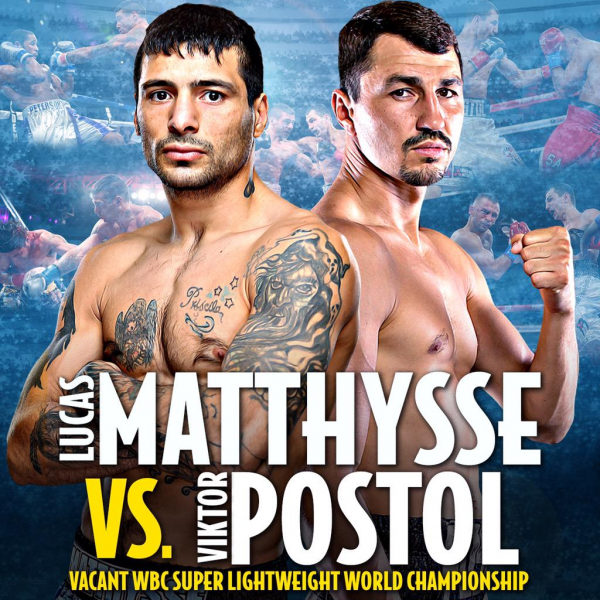 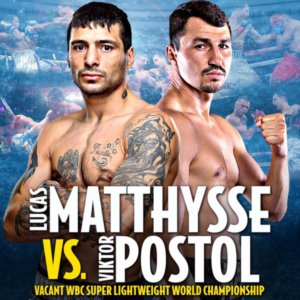 Hard hitting fan favorite Lucas Matthysse (37-3, 34 KO’s) will be making his ring return against tough undefeated Ukrainian Viktor Postol (27-0, 11 KO’s) on Saturday, October 3rd. The fight will be for the WBC Jr. Welterweight title and will be televised live on HBO.

Lucas Matthysse has arguably been the second best Jr. Welterweight in the world over the past few years and managed to get a crack at supremacy in 2013 against then undisputed champion Danny Garcia. Unfortunately, he ended up losing a decision but has since bounced back with three quality wins.

This past April, Matthysse took on the hard punching Siberian, Ruslan Provodnikov and looked good in getting the decision win. In that fight, he utilized his jab very well and displayed some of his boxing skills. He was also catching Provodnikov with big flush shots throughout the whole fight.

Matthysse stands at 5’6 ½ with a 69-inch reach. He holds quality wins over the likes of Mike Dallas Jr, Lamont Peterson, John Molina, and of course, Provodnikov. He possesses great punching power in both hands and has good fundamentals. However, Matthysse has shown that he can get out-boxed and stylistically that is exactly what Viktor Postol is.

Postol likes to work constantly off the jab and use his boxing skills. He is an extremely tall Jr Welterweight standing at 5’11 and fights on the outside. He holds quality wins over Demarcus Corley, Hank Lundy, and Selcuk Aydin.

Stylistically, he has the attributes to give Matthysse major problems. Postol’s piston like jab potentially might be a major issue for Matthysse to deal with along with his movement. Despite only having 11 KO’s in 27 fights, Postol’s power shouldn’t be over looked by Matthysse. Postol has shown he can pack a punch when he sits down on his punches, and his power has shown to carry late into fights as he displayed in his KO win over Aydin in round 11.

However, Matthysse is obviously the more battle-tested fighter having fought some of the best in the division while this will be Postol’s first time facing elite opposition. This fight has many intangibles and is the next fight on the boxing calendar that I’m looking forward to.