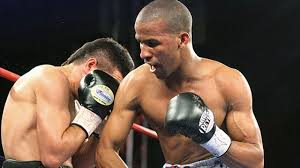 In the early rounds Barthelemy kept Saucedo at bay with his jab and measured him up perfectly for right hands down the pike. He was able to get Saucedo’s attention on more than one occasion with the right hand.

As the fight wore on, it appeared that Barthelemy was letting Saucedo come to him and timed him with counter right hands.

In the fourth Barthelemy became the aggressor once again and picked up the pace. Barthelemy had Saucedo in trouble a few times in the fifth and it looked like Saucedo was ready to go, but he did manage to land a clean left hook of his own before being badly hurt at the end of the round.

The fight became very one sided from there on out and turned into a rout with Barthelemy having his way with Saucedo, practically landing anything he wanted too. Surprisingly enough it seemed as though Barthelemy was content to just comfortably outbox his overmatched foe.

In the twelfth round Barthlemy landed an overhand right that floored Saucedo but it was ruled a slip by referee Steve Smooger. Other than that the fight was uneventful.

In the end all three judges scored the fight 120-108 for Barthelemy.