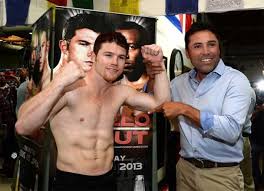 It wasn’t that long ago that Richard Schaefer left Golden Boy Promotions and Floyd Mayweather stated that Golden Boy would no longer be promoting Mayweather’s fights unless it would be something huge such as a Canelo rematch.

Golden Boy owner, Oscar De La Hoya believes that his company and Mayweather’s company, Mayweather Promotions, could work together down the road but if not, De La Hoya is fine with that.

Losing Mayweather will definitely affect Golden Boy’s numbers but will not ruin the company which has one of boxing biggest and brightest stars in the sport.

“We at Golden Boy are extremely proud and happy to be promoting right now the present and the future of boxing which is Canelo Alvarez.”

When Mayweather worked with Golden Boy there were at times negotiations taking place for one of the biggest fights of all time, a showdown between Mayweather and Manny Pacquiao. De La Hoya believes that the fight can still get made but his patience has begin to run thin but he believes that he can make the next best fight out there between his brightest star and a vet that refuses to go down and believes it can generate huge numbers.

“I’m still optimistic and so is every fan out there [that Mayweather-Pacquiao will happen]. I’m waiting patiently but my patience is starting to run out and now I’m smiling over Canelo-Cotto which I know will fill that void that the fans have. I believe that Cotto-Canelo can really take boxing to a whole new level. That’s the fight that I now want to see. I see no reason why this fight can’t get close to the 2 million pay per view mark. It’s a huge fight and you have to give a lot of credit to Miguel Cotto who is an outstanding fighter but you bring in the Canelo factor and it takes pay per view fights to a whole new level.”