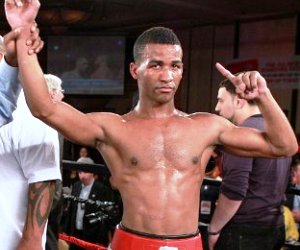 Barthelemy (21-0, 12 KOs) controlled the bout from the opening bell and was the more active and accurate fighter, throwing 819 punches to Saucedo’s 382. Saucedo (52-6-3, 8, KOs) tried to counter, but he wasn’t quick enough to land anything meaningful against the elusive Cuban. Barthelemy, who landed 50 percent of his power shots, employed a diverse attack of uppercuts, hooks and jabs and fought with his hands down and by his side for most of the fight.

“It was a good fight,” Barthelemy said. “Saucedo is a veteran guy. In one moment, I thought I was going to knock him out, but he knows how to make the fight last.

Saucedo didn’t win a single round and was outclassed in his United States debut.
“I did everything I could,” Saucedo said. “We gave it our all but he is just a stronger and bigger guy. He’s a very good fighter, but he’s too big for this weight division.”

Martirosyan promised to win this fight for his promoter, the recently deceased Dan Goossen, and he delivered. The contender was able to get inside the lengthy Nelson, where he did the majority of his damage with powerful right hooks.

The pace picked up in the second half of the fight, with Martirosyan cleanly landing right shots and backing up Nelson. In the latter rounds, Martirosyan consistently threw wide shots around Nelson’s guard and opened up a cut under his eye in the eighth. Martirosyan’s power shots were the difference, with the Armenian landing 42 percent compared to Nelson’s 32 percent.

“We had to turn this into a fight,” Martirosyan said. “He is tall, he has long arms and it’s hard to fight a guy like that. Around the seventh or the eighth I thought about [Diego] Corrales vs. [Jose Luis] Castillo and going to war. I knew we needed to dig deep to win this fight and that’s what we did.”

“It’s been a hard week for us. Around round eight, I thought about Dan and he made me fight hard. This was for Dan. I know he was watching me and this is for him. We love him and we miss him.”

Martirosyan’s trainer and Dan’s brother, Joe, agreed: “He asked us to win this fight and we honored that request as best as we could.”

Nelson, who was more accurate that Martirosyan with his jabs, disagreed with the judges’ scorecards.

“I thought I won, but the judges saw otherwise,” Nelson said. “I can’t complain. Vanes has some nice pop and hand speed. He’s nothing special, but I felt he fought me differently than he has past opponents. I just need to keep fighting and keep moving forward and we’ll see what happens.

“It was a good, tough fight. What else would you expect from two guys in the top 10 in the division? Of course I’d like another shot at him.”

Karpency (24-4-1, 14 KOs), who took the fight on short notice, was supposed to be a tune-up for Dawson (32-4, 18 KOs) as he climbed back from two tough consecutive losses to Andre Ward and Adonis Stevenson. But Karpency fought with confidence and controlled the pace of the fight, which was contested almost entirely in the center of the ring.

“I just came here to win, I had nothing to lose,” Karpency said. “I know I did enough to win and thankfully the judges got it right. I know it was close but I won hands down. I came here on short notice and I had to pace myself and make my punches count. I buzzed him a few times but couldn’t get him down. He was running. He thought he had the fight won.

Dawson didn’t throw any meaningful punches with his left hand in the second half of the fight and told to SHOWTIME announcer Steve Farhood that he hurt his left shoulder in the third round.

“I hurt my shoulder in the third round,” Dawson said. “I landed more jabs than he landed punches. That’s [expletive]. They must want me out of the game. That’s crazy. I fought with one arm since the third round. Come on, man”