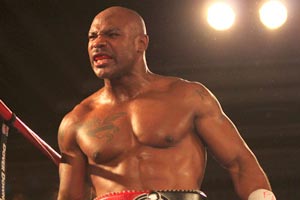 Tha Boxing Voice recently had the opportunity to interview 42 year old American heavyweight Amir Mansour (20-1, 15KO’s)
The exciting Southpaw is back in action next month against little known Fred Kassi (18-2, 10KO’s)  and despite feeling he won his fight with Steve Cunningham, he admits he lost his composure in his only loss and has stated that won’t happen again.
As always he has promised to go out there and give it his all with the durable Kassi, who he knows cannot be under-estimated. “This guy has good punching power, (but) honestly I don’t know nothing about him, when I fight I just train (with the mindset) that the guy that’s in front of me is going to have the fight of his life.”
Mansour was quick to deny that prison preserved his 42 year old body but instead credits that to not having an an extensive amateur career with hundreds of fights like most fighters “I’m not attributing anything positive in my life to prison, it’s a horrible, sad, terrible place to be.”
He isn’t confident that a Cunningham re-match will happen and also isn’t concerned with rankings. “The only thing I can do is keep doing what I’ve been trying to do and that’s fight anybody that’s willing to fight me in the top ten (rankings).”
Amir then discredited another American and the rankings. “Look at Deontay Wilder, he went and fought a guy who I stopped in one round, he’s still a top ten fighter, that ranking stuff man, that don’t mean shit, at the end of the day, it’s gonna be what the people want. All it takes is for your manager to pay the sanctioning fees and you’ll be right in the ranking.”
Finishing off the interview “Hardcore Mansour” explained that he is friends with another heavyweight prospect Bryant Jennings and the pair have been linked with fighting each other before but have mutually agreed they won’t do so only for bragging rights but only for a certain amount of money.
Tweet