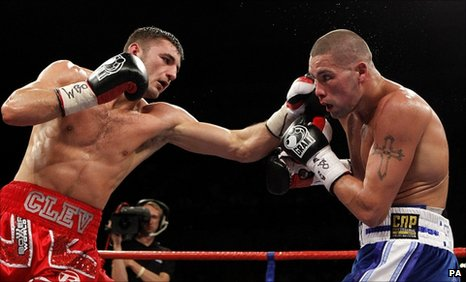 Tony Bellew and Nathan Cleverly will take another step closer to a rematch as they share top billing at the Echo Arena in Liverpool on July 12, live on Sky Sports – part of a star-studded bill with Rocky Fielding, the Smith brothers and Anthony Joshua MBE.

Bellew and Cleverly clashed in October 2011 for the Welshman’s WBO Light Heavyweight title at the same venue, and their bitter rivalry has continued to grow after the Liverpool man dropped a majority decision in his challenge and a rematch never transpired.

The pair made successful debuts at Cruiserweight earlier in the year, with Bellew first to step up to 200lbs with an 11th round stoppage win over Valery Brudov in March, and Cleverly followed him in May with a two-round demolition job over Shawn Corbin.

Opponents for both men will be named by Eddie Hearn at a press conference next Tuesday, and the promoter is looking forward to close a fantastic season on Merseyside.

“July 12 promises to be a great night in Liverpool – as we sign off for the summer with a bang,” said Hearn. “There’s real animosity between Tony and Nathan as they aim to overcome one final hurdle before they meet in October. Anthony fights in Liverpool for the first time as a pro and Callum and Rocky will be in big step ups.”

Unbeaten Super Middleweight star Fielding, brothers Paul, Stephen and Callum Smith and Olympic Heavyweight sensation Joshua will all be in action and looking to put in spectacular performances to go into the summer on a high.