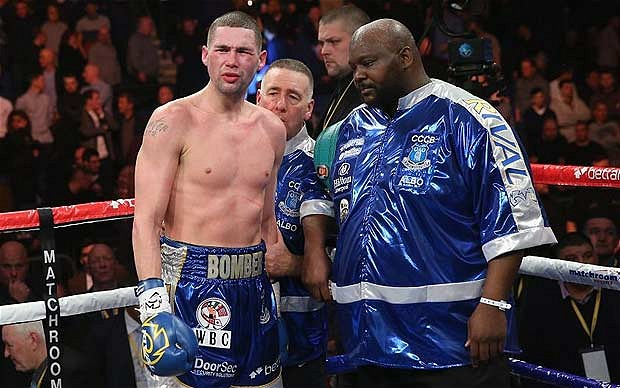 Tony Bellew is under no illusions as to the task ahead of him as he prepares to make his bow at Cruiserweight when he takes on Valery Brudov at the Echo Arena in Liverpool on March 15, live on Sky Sports.
‘The Bomber’ moves up in weight on the back of a sixth-round stoppage defeat to Adonis Stevenson for the WBC Light Heavyweight title in November, and now wants to work his way to a World title shot at a weight he had been considering fighting at for some time.
“I am ranked number seven with the WBC at Cruiserweight already,” said Bellew. “I am coming into an exciting division with established World champions and I am hoping to make my mark in this division. My two goals in boxing are to earn a living for me and my kids, and to become a World champion.
“I will go in with Valery Brudov, who has had 45 fights and 41 wins, 28 by knockout – he has had more knockouts than I have had fights. He has a good record, he is a good fighter, and this is a dangerous fight, make no mistake. But if I am going to be anything in the Cruiserweight division I have to beat this guy and look good beating him. It is a test, and it should let me and everybody else know where I am in the Cruiserweight division.
“This is a new chapter, a new beginning for me. It is up to me to pick up the pieces, work hard, and get to where I was at Light Heavyweight as a Cruiserweight.
“I have always thought about fighting at Cruiserweight but I had always had the attitude that if it isn’t broken, don’t fix it.
“I have to earn my shot now, the way I did at Light Heavyweight. I have to show I am a top Cruiserweight and an A-level fighter. I believe I am but there is no point me saying that, it is better for me to get in there and prove that.
“There are great World champions at this weight. They are world-class fighters, proven fighters and there are no easy touches there. The division is really good.”
Bellew’s bout with Brudov tops a great night of boxing in Liverpool, with Commonwealth Super Middleweight champion Rocky Fielding defending his title against former Commonwealth champion Charles Adamu. Fielding is on a collision course with British champion Paul Smith who fights on the bill, but his brother Stephen is out and will undergo minor surgery on an elbow injury this week.
Sheffield Welterweight star Kell Brook faces Mexican Welterweight champion Alvaro Robles in a ten-round bout as he prepares for a World title clash with Shawn Porter, and London Lightweight Kevin Mitchell will also be in action on Merseyside as he builds towards a big fight in the summer.
Exciting youngster Robbie Davies Jnr faces his fifth pro fight and Liverpool’s Neil Perkins continues his hunt for a first title shot against Londoner Erick Ochieng.
Tweet