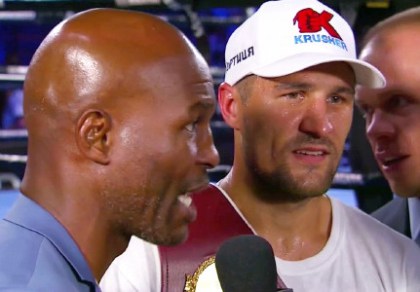 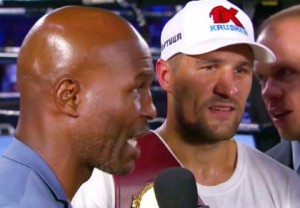 On Saturday, August 2nd, of this year Bernard Hopkins attended Sergey Kovalev’s impressive knockout defense of his light heavyweight title. Just a few months shy of his 50th birthday, Hopkins brims with confidence, even coming off as a little smitten with his most recent challenge looming.

Known for his crafty defense, Hopkins’ discipline and patience inside and outside of the ring have kept him at the top of the sport for decades. As of late, he showed his craft again in business dealings with light-heavyweight champ Adonis Stevenson. Stevenson, who famously avoided fighting Sergey Kovalev by going over to fight on Showtime, seemed the favorite to land a unification match against Hopkins. However it seems that Stevenson’s team took too long in making a deal and Hopkins surprised everyone by instead choosing to face Kovalev.

The same promotional screens that Stevenson used to evade Kovalev and pursue Hopkins are being smashed straight through by the 49 year old champ. Hopkins was the last Golden Boy fighter to fight on HBO at the beginning of the promotional civil war, and as a testament to how timeless and versatile he is, he will be the first fighter to fight on HBO after the dispute has settled. Hopkins reflects on how surreal the situation is for him with Thaboxingvoice.com.

“Forget about my ego, forget about this side’s ego. The fans won,” said Hopkins on his groundbreaking fight. Hopkins is not only signaling the lifting of promotional embargos, but pursuing a feat that most atheletes can only dream of at their peaks, let alone achieve them at 49 years old. “I wanna be undisputed light heavyweight champion of the world, That’s what I set out to do, and that’s what I’m gonna do,” Hopkins declared confidently. Hopkins’ sole focus is on unifying his division, and it never mattered to him whether it be against Stevenson or Kovalev. He has always been ready and eagar to fight either man.

Hopkins is a character who makes every fight and every confrontation play out on his terms. The Stevenson camp made the mistake of thinking they had the crafty veteran cornered, and they’re now left reeling from his counter. Though Hopkins owns 5% of Golden Boy Promotions, he has no qualms about taking a fight on a rival network against an HBO star fighter. “It was a better offer and a better deal. It’s all about the better deal,” reasoned Hopkins. “Everyone has a commercial interest. At the end of the day, I’m a business man, and my relationship shouldn’t change with anyone when I make a good business decision dealing with Bernard Hopkins,” said Hopkins of his position with Golden Boy.

Hopkins is truly attempting something amazing with this unification match. Not only is he pushing his body to the limit against a much more youthful opponent, but he his bending the very rules of the boxing business to do so. Kovalev and Stevenson are both monstrous punchers who could badly hurt anyone on the right night, but Hopkins sees himself as part of a classic era of boxers who will fight anyone, any time. Though he lacks the image or fanfare of a Floyd Mayweather , Hopkins patience and forsight have seen his career over ups and downs and in time carved out his place in boxing history among the very best.