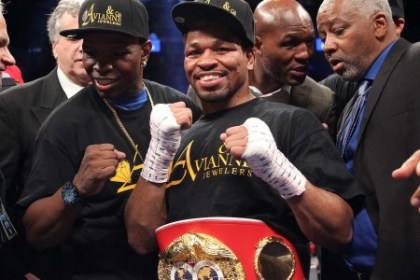 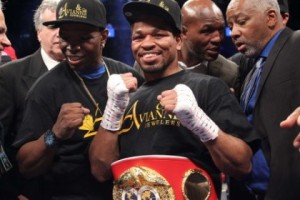 IBF Welterweight champion Shawn Porter, alongside his father and trainer Kenny, spoke with assurance and calmness about their upcoming defense scheduled for August 16th against British challenger Kell Brook.

The champion was unperturbed when asked about any concerns he may have regarding Brook, “I don’t think so. Everybody’s asking me about his power. I haven’t seen anything on film that is different from anyone else.” The nonchalant reply is indicative of the champion’s confidence, but he will do well not to overlook the power of a man who has stopped twenty-two of his opponents on a thirty-two fight winning streak, albeit largely at British level.

Porter himself has yet to face anybody with comparable pop since his move down to the 147-pound weight division, where his two most notable wins are against fighters renowned for their lack of punching authority in Paulie Malignaggi and Devon Alexander. He remains however, a worry free individual.

The soft-spoken twenty-six year old deferred to his forthright father after a while, who went on to outline the commitment his son shows to the sport of boxing. “Shawn stays within twelve pounds of the weight (147 lbs) year round. He doesn’t go on a diet he lives this way. This is his life until he is done with boxing.” These comments could be perceived of those of an overbearing authority figure, but his presence and his philosophy have surely played a big part in Shawn’s success. By consistently staying within a reachable distance of fighting weight, Porter has a much better chance of retaining that bullish strength that has been on such prominent display since he won the title late last year.

Based on those performances alone, Kell Brook is in a unenviable position. The boxer-puncher from Sheffield, England has only been put under intense pressure once, in his first fight with unheralded Carson Jones over two years ago. Over the first six in that fight Brook put on a fine show but nearly folded under the heat that Jones brought during the second half, and was lucky to walk away with the points win.

Porter brings a more sophisticated and intense pressure than Jones was ever capable of producing. He looks like he just mauls his opponents but his approach is more intelligent than primal, and perhaps that is why both Porters seem so relaxed at this point. The younger will have to watch out for Brook’s power no matter what he may admit on camera, but, objectively speaking his confidence is justified.