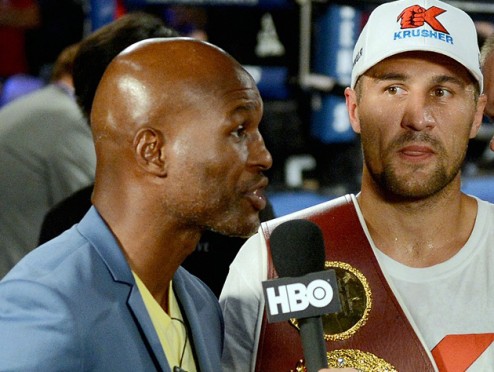 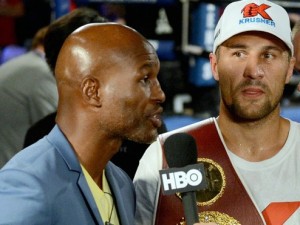 Bernard Hopkins is known as many things, the executioner, the alien, the ageless wonder, and now peacemaker? That’s the role you can essentially say Bernard Hopkins played when he agreed to fight Sergey Kovalev in November. With a pending lawsuit from Main Events in the debacle that was Stevenson-Kovalev which in turn included Stevenson and his promoter Yvon Michel, Showtime and Stephen Espinoza, and Golden Boy where Hopkins is a partner. It all vanished when Hopkins signed on the dotted line to fight Kovalev.

It was all in the plan.

“It was premeditated. It was already planned. My intentions in a short term time table was to make it happen and it was calculated,” Hopkins told ThaBoxingVoice.com. “I didn’t look at my own commercial interest to fight Kovalev and unify the titles for the second time in my career. It’s not about me, me, me. No one looked at it like you guys did. I accomplished the Kovalev fight but i accomplished the relationship with 500 lb. guerilla and that’s HBO.”

“Showtime has been respectful to me and I’ve been on their air but mending a relationship back gives other opportunities. It’s the same thing i did when i stood up in front of the senate hearing in 1998 and spoke on why boxing needs regulation and law. I was public enemy number 1 when i stepped out that room,” explained Hopkins.

So when he had the opportunity to do it again, Hopkins looked at the grand scheme of things in his decision.

“I had a chance to do that again when others don’t give me credit for thinking/fighting Kovalev takes away Kathy Duva’s lawsuit, they won’t give me the credit for it. I did not to do a presser or anything with my publicist but they knew, “stated Hopkins.

But what exactly did he know and why choose Kovalev over Stevenson whom he made have made more money fighting?

“Before me falling in the trap at the last hour, one is tied in with the other, the IBF timeslot from what i wanted to do and who I was going to fight. But not only who i fight, but how I can get 3 or 4 things accomplished in taking this fight,” explained Hopkins. “I said to my partner and attorney, if i fight Kovalev, who most people believe Stevenson ran from him, ran from one street to another which is Showtime, leaving HBO, had a lawsuit follow him. But not only him, it followed Showtime, Richard Schaefer, and I personally, also with Golden Boy inherited their lawsuit.”

So when it came to strike, he struck.

“Fighting Kovalev that would  take away Kathy Duva’s claim.” Hopkins said. “I’m not a lawyer but I been in court with the best hustlers and promoters. So I said to myself, I want to fight the guy that Stevenson ran from, so that makes me the undisputed champion. The media–which i will snatch first when i beat this man, will say that this is the fight of the year.”

Fight of the year maybe a stretch in the manner that Hopkins fights inside the ride and choosing to trade with Kovalev may not be the best idea. But I’m not a 49 year old man still beating younger guys in the ring. But what Hopkins did accomplish was making Hopkins-Kovalev the biggest fight on premium network TV to end the year. He wanted a big fight and this was it.

“Some will say this is the biggest fight of the year. I haven’t had a big fight like this in years and that’s what I wanted. I have been craving for this, taking small fights and small purses to get here,” Hopkins explained. “So A, the lawsuit would be dropped. B, saving a relationship with Golden Boy and HBO would be at a discussion. C, I was the last fighter from Golden Boy on HBO and the story would be I’m the first guy from Golden Boy starting a new life and chapter.”