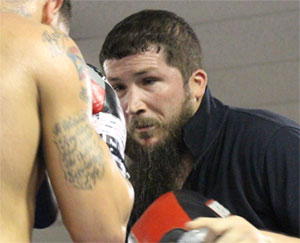 On August 16, Gabriel Rosado will fight Brian Vera in a Big-Knockout Boxing Event. The fight will take place in a 17-foot circular ring and will be fought with 10-ounch gloves. Today thaboxingvoice.com spoke with Rosado’s former trainer, Billy Briscoe, on this upcoming event, his split with Gabe Rosado and his other fighters.
Gabriel Rosado
Billy Briscoe stated that the split with Gabriel Rosado had nothing to do with the new direction the fighter has taken in his career.  ”Gabe is like family to me. I’ve been with him from his first professional fight all the way to a title shot for the middleweight championship of the world. It is nothing personal. We just have differences in philosophical believes”, Billy Briscoe told thaboxinvoice.com today.
That there is no hard feelings between trainer and his former fighter became also clear when we asked him about his prediction for this upcoming BKB-fight. ”You can put him anywhere and he’ll find a way to win. Gabe is a real fighter. As long as they give him a fair shake on the scorecard, he will be great. ”
Talking about fair shakes, Briscoe feels that Rosado should have been given a second chance to fight J’Leon Love after not getting the fair shake in their first fight.
On being a trainer and his stable.
We don’t have to worry that the Philadelphia based trainer is getting bored now that he is no longer working with Gabriel Rosado. He does have many other fighters in his stable, who he is giving his full dedication too. ”I am not in here for the paycheck,” he told us. ”I put my heart and soul in this. This is my passion. If i can’t give a fighter 110 %, then i won’t do this. There is no half stepping in boxing. This is a serious business. This is the hurt business. You gotta come correct or don’t come at all”.
One of the fighters Briscoe is working with is Canadian welterweight Samuel Vargas, who just won an 8-round unanimous decision over Juan Jesus Rivera in Calgary. Another interesting fighter Billy Briscoe is training is heavyweight Joey Dawejko. The heavyweight is coming off a win over undefeated Mark Rideout. On Dawejko Briscoe said, ” When he is in shape and mentally prepared, he gives anybody problems. And when he trains with me, he is always in shape and prepared. ”
When we asked which of his fighters fight fans should look out for, Briscoe’s answer was clear. ” All of them!”
Tweet