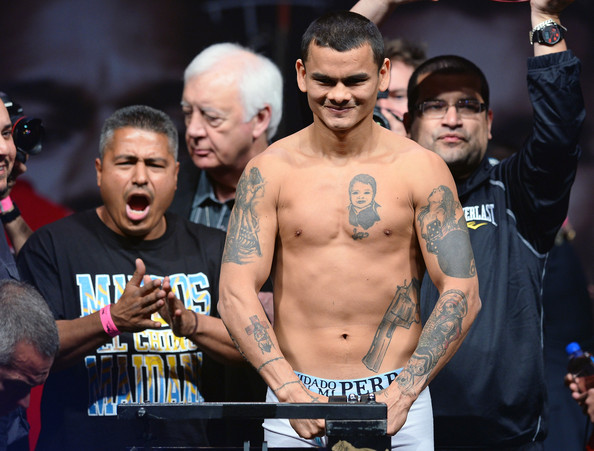 Following a controversial loss to Floyd Mayweather Jr. (46-0, 26 knockouts) back in May, Robert Garcia has been cast in the spotlight as the trainer who may or may not have successfully cracked the Mayweather code. After all, he led his fighter, Marcos Maidana (35-4, 31 knockouts), through a gameplan that some say bothered and maybe even beat Mayweather. Regardless, Mayweather was awarded the decision and now all focus has been placed on the September 13th rematch between Maidana and Mayweather.

With early promotion for the bout already beginning to wrap up, Mayweather has been quick to attribute Maidana’s in-ring success to his “dirty” or “MMA” style of fighting. It was a statement that polarized some fans, but those loyal to Mayweater were quick to side with the champ’s reasoning. It’s a train of logic and seemingly constant point of discussion that even Maidana has given up paying any mind to, but Robert Garcia refuses to stay quiet and Mayweather labels Maidana as a dirty fighter.

“[Mayweather] is trying to create excuses. He’s trying to get [the media] to believe that we’re dirty. He’s trying to get the judges, we don’t know who the judges are, and neither does he, but whoever they are they’ll be reading stories like that and it will get into their head. It’s part of the way [Mayweather] is. He’s smart, but hopefully we’ll get an even shake. Even with the ref, whoever the ref is, by hearing all that [Mayweather] is saying the ref is already going to look into that. Hopefully we get a fair shake in that as well.”

Controversy aside, Garcia is enjoying his second go around in the media circus that follows the announcement of a Mayweather fight. City by city, state by state, Garcia couldn’t help but acknowledge the support and turn out that both fighters would bring out during press tours. Especially when considering the overwhelming support Maidana has received as preparations begin for the rematch.

As overwhelming as fan support has been there is still no ignoring that many view Maidana as a significant underdog, with some betting lines even having him as a 5-1 underdog. That being the case, Garcia still refuses to change much of what proved so successful in Maidana’s initial meeting with Mayweather.

“If [Mayweather] thinks he had a rough fight the first time, this next one will be rougher. We aren’t going to give him any breaks; that’s the way we fight. We take all the chances we’ve [sic] got. We’re going to make a few adjustments, a few punches that we’re going to work on and correct, but besides that we’ll remain aggressive.”