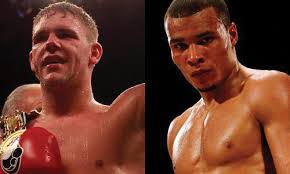 It would be a stretch to suggest a scenario in a UK fight that’s recently taken place, where the pressure upon both fighters could be even more over bearing. Well now there’s a new twist to this story, one to the tune of 100k.

Billy Joe Saunders 20(11)-0 and Chris Eubank Jr. 17(12)-0 due to fight one another on the 29th of November, in one of the UK’s most anticipated grudge matches, will now fight with an additional bounty balanced precariously on each of their heads.

When these two gents appeared live via telephone on Talk Sport Radio, between an unusually comical diatribe of insults and daggers spat between them, Saunders offered the loser to donate 100,000 to charity, to which Eubank Jr accepted.

Some of the gems shared in particular featured Billy Joe Saunders bursting into wheezing laughter when Eubank Jr. calmly presented his intentions and aim of nabbing all three belts from Saunders, The British, Commonwealth and European. Billy decided that proposition in particular was most amusing.

Eubank Jr is fighting this Saturday bizarrely enough against a half decent opponent. Germany’s Florian Wildenhoff 18(8)-3 More information on that can be found in my video breakdown for the weekend here: Wingy Boxing Breakdown 47. Saunders further pressed his bulging case of concerns, this time regarding any kind of injury conveniently occurring after Eubank’s Wildenhoff warm up thus stalling the November 29th Meeting.

“It doesn’t matter if I come in with black eyes and broken hands, the fight’s gonna happen, you are going to lose” was the relaxed rebuttal from Eubank Jr., spoken in a tone so reserved its contrast alongside Saunders was stark enough to have the young traveler somehow by default, with almost every response, appear the fool.

“I’ve been to the Olympic games at 18 years of Age! When you was 18 years of age, you was sitting on your dads lap stroking his head,” chuckled Saunders, much to the apparent delight of the hosts. This was encouraged from an exchange when Eubank Jr. questioned the relevance of Saunders amateur fights. Only lord Eubank Jr. would suggest that anything pre-professional in boxing is to be sneered at. Brilliant.

The conversation then tilted toward how relevant amateur experience is at all, Eubank Jr. informing Saunders that he’s been trained as a professional since he started. Dismissing the whole point scoring nonsense it entails. The rest of the back and forth involves Saunders suggesting to people this fight is easy, yet according to Eubank Jr. still training for the fight of his life, and Saunders stating if Eubank Jr is the real deal, we will find out on November the 29th.

The build up gets more intense, the hatred more seething and the ramifications for both men, more pronounced, we are just over a month away, and we can’t wait. I won’t spoil the rest, listen below and enjoy…