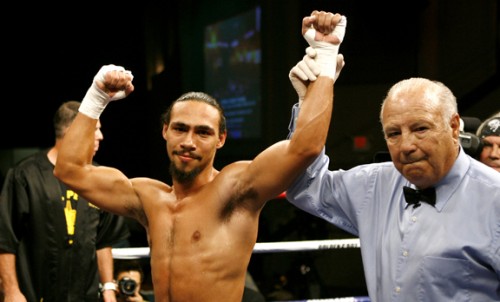 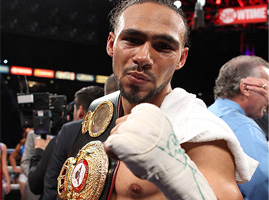 Sean Zittel spoke with Keith Thurman’s (24-0 21 KO’s) trainer Dan Birmingham at the Premier Boxing Champions press event in Las Vegas and discussed what he is expecting out of his fighter against Robert Guerrero (32-2 18 KO’s) on Saturday.

Knockouts are always a part of the discussion when talking about Keith “One Time” Thurman but Robert “The Ghost Guerrero is his toughest competition to date. Against a formidable opponent like Guerrero that has never been knocked out, one would expect Thurman to be concentrating on simply pulling out a victory but Birmingham assures that his fighter will be looking for the KO on Saturday.

“Well, when we started camp Keith said to me ‘Dan, I want you to train me to knock this guy out. So you know, he’s approaching this fight with a lot of passion, a lotta fire so we’ll see what happens.”

With that kind of approach, Birmingham then had the task of reminding the press that Guerrero is no pushover. He just expects Thurman to be in a totally different class.

Dan Birmingham on Robert Guerrero, “I think he’s a terrific fighter. A 4-time world champion, our toughest challenge to date… If Keith is Keith then we have no problems at all.”

Inevitably everything comes back to Mayweather-Pacquiao, doesn’t it? As a part of Al Haymon promotions, many suspect that Thurman could be setting himself up for a fight with Mayweather in the future if they get past the current challenges they have in front of them. Birmingham went even further than just suggesting it…

“No, doubt. Especially when he stop’em. When he stops’em he really has a legitimate beef to say ‘I did it, you couldn’t, let’s get it on’“

The different promotions make the odds of a Thurman-Pacquiao fight happening slim for the time being but if Mayweather were to get past Pacquiao (not the foregone conclusion many would have you believe) you might have something there. It will all depend on how Thurman looks in his fight with Guerrero. If it is a life and death struggle and he eeks out a split decision, no one is going to be interested in seeing him face Mayweather. If he handles Guerrero easily? Then you have a conversation.

A victory against Guerrero is not a given. Thurman cannot underestimate Guerrero. He is a legitimate welterweight, that can give anybody not named Mayweather a long night. Thurman will have to be everything everyone has been saying he is and maybe a little bit more, if he wants to put The Ghost away in the spectacular fashion it would take for him to earn a Mayweather fight sooner rather than later.

You can see Keith Thurman attempt to earn a fight with Floyd Mayweather Jr. on the March 7th debut of Premier Boxing Champions on NBC against his toughest challenge yet, Mr. Robert “The Ghost” Guerrero.