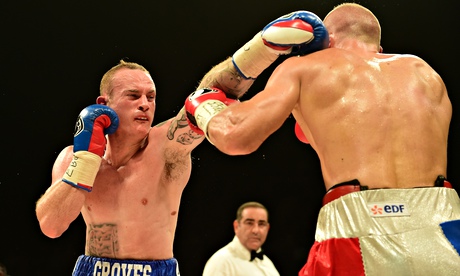 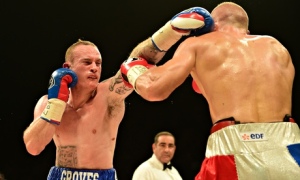 The recent dismissive reluctance on the part of Anthony Dirrell (WBC Super Middleweight Champion) to entertain any fight with George Groves could well be reversed off the back of the competitive (in parts) clash “The Saint” was involved in on Saturday night.

The understandable expected concerns Dirrell is very likely internally housing, could possibly be eased after the occasional lapses in defence from Groves were laid bare Saturday. These said errors were nothing too serious, at this stage of competition, but enough for the observant eye to quietly note. Add to that, the continual stamina doubts that perhaps at times unfairly still unrelentingly haunt Groves. Those very same fatigue concerns appeared to be justified in spots on Saturday, as Groves faced European Super Middle Weight Champion Christopher Rebrasse, who came into the fight with a record of 22(6)-2-3

Groves sets the pace of the fight early with a bullet spray of sharp jabs, more to keep Rebrasse thinking then to land each shot centre of the bull’s eye. It takes part way into the 2nd round for the fight to warm, courtesy of a brief exchange in which Groves’ hand speed encourages respect from a reluctant slightly wooden and upright looking Rebrasse.

Groves is comfortable to trample forward into the Frenchman’s artillery, with only six of Rebrasse’s opponents being halted, there’s little issue with throwing a few inside and examining exactly what Rebrasse is open to respond with. It’s a return, but not one Groves has to concern himself with, as “The Saint’s” fists are finding the target with much more regularity, as they should; already it is evident there’s a fairly distinct skill gap here. Groves is defining that contrast in class with each bell.

A left hook in the 4th from Rebrasse excites, and a few more follow between now and the 7th but its still George who has gripped hold of the reigns in the fight. A noticeable revision in tactics is employed in the 7th, as George appears to step off a little and shoot the sharp jab from a slightly wider distance. This switch up in game plan coincides with the first signs of Groves looking slightly off rhythm; the sharp edge to his work being rounded off a little

These are the rounds where Groves’ tank depletes significantly. Paddy Fitzpatrick in the corner pleading with George to not be duped by the mind and wane to any perceptions of exhaustion.

Rebrasse isn’t winning the fight overall, but he’s working Groves well in more than a few of these rounds, if never quite claiming any in any kind of clear cut manner. Rebrasse’s success can be observed when he adjusts to the hand speed and volume of Groves, which isn’t often. Like in the 8th for example, Rebrasse finally igniting the fighter within and beckoned Groves forward with gloves, attempting to goad the Hammersmith resident. Both are landing punches in this round, it’s competitive and appreciated by a pro “Saint” massive, captivated from the stands.

In the final three rounds, despite clearly tiring, Groves actually appears to up the pace a little, and close out in impressive fashion, never overwhelmingly dominant but laying down enough work to dictate the rounds, and inserting enough trademark busyness; weaving and bobbing, to continually present a frustrating target for Rebrasse.  Rebrasse it would appear, who was a little more limited than was expected, using the early portions of the fight as initial evidence.

Groves wins a UD with the judges, and takes every round on my card. There’s the impression of his trainer Fitzpatrick beginning to wrap itself over and around the groundwork Booth had imprinted upon his former fighter. It appears to be a slightly closer game, with an emphasis perhaps on Groves’ inside exchanges.

I still like Groves in the Dirrell fight, Dirrell  being a boxer with a good technical base, but not always the fighting intent to mark his territory within the ring. This is something Groves does well. It’s a winnable fight for Groves, but not a guaranteed victory. This is probably highlighted by the Rebrasse fight to some extent. Where Groves got a good win, but had to work relatively hard for it. Groves appears to have brushed the two defeats to Froch off his shoulder though, although he still requested a third to the champion, who was watching ringside.

Back to Anthony and present matters, Groves has enough to do it; he can scalp Dirrell, it’s blending each element together on the night which forms the core of the concerns shared from these parts of the waters. We follow the self appointed marching band for Groves with interest, and see where this journey takes us.