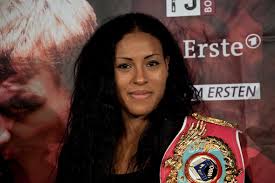 History will be made in female boxing on September 13,
2014 when IBF Champion Ivana Habazin and WBC, WBA and WBO Champion Cecelia Braekhus
meet in the ring at TAP 1 in Copenhagen, Denmark, each aiming to become the first undisputed
female welterweight champion of the world. The fight, headlining a card properly titled “Making
History,” will be the first unification fight in female boxing history where all four titles are on the
line. IBF President Daryl Peoples stated, “On behalf of the IBF, I wish both of these talented
women the best of luck on this day and congratulate them on reaching this pinnacle in their careers.
Ivana Habazin and Cecilia Braekhus have worked hard to get to this point and as an organization we
are proud to be a part of this momentous event in the sport.”